Home / Fantasy Baseball / I finally gave in, and said 'fuck it'

I finally gave in, and said 'fuck it' 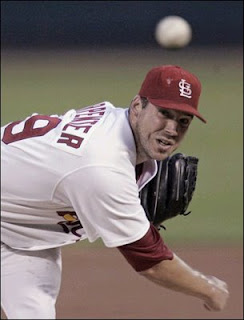 My offense in fantasy baseball has been phenomenal thus far. They’ve done far more, with far less than any team in my 10 team roto-league. I expect them to hang in there and do the job, and end up winning some of the tough categories offensively. The only thing seperating me from being a top-3 team in our fantasy league is my pitching staff, namely the lack of starting pitching that I have.

I didn’t think I would have to worry about starting pitching this season, that’s why I paid the high price for this guy, Chris Carpenter-and took him insanely early in the draft. I figured I was getting a Cy Young type guy who would bolster my staff and hold down the fort all year long for me. I didn’t mind paying the high price and passing over proven sluggers that would offer 40 homeruns and a .300+ average.

That is all a mirage now. With the recent anouncement that Chris Carpenter will miss 3 more months, and that at best he’ll give a fantasy owner 6 weeks of baseball (even if he recovers from arm surgery), well that wasn’t enough to keep him around. This morning, instead of clogging up the DL spot and hanging onto hope as I’ve done the first month and 1 week of baseball with ‘Carp, I just cut his ass. I cut ties and I’m going to deal with my loss. Someone else can pick him up and hold out false hope, it’s not going to be me anymore, no it’s not.

That leaves me with a staff of Carlos Zambrano, Ted Lilly (the dirtball), Mark Buerhle, and Chien Ming Wang. I’m going to also have to cut ties with another hitter on my team to pick up some kind of pitching and possibly another closer to pick up yet another starter to try and make up the difference in ERA, Wins, K’s, and WHIP that is the cause of me losing right now (6th place out of 10 teams) in my league. The problem also is, while I stocked up in closers to begin the season, I’m only defeating the next highest save team by a few saves, making it tough to concede that position that I’m winning to go and get a starter.

I’m thinking I need to trade a closer for a good, solid starter. Where my problem lies is that I might wait too long to do it. I need starts now, and as many as possible. Chances are, highly due to the Carpenter debacle that may cost me this league, that at the end of the season I’m going to have to cut all my closers, and just throw any Johnny-come-lately brutal in there that is starting on a random day to give me starters stats. I must weather the storm and from now on, Chris Carpenter’s name shall not be mentioned by me on this publication.

Related Items
← Previous Story But I thought Todd Helton could only hit at Coors?
Next Story → The fantasy baseball injury-gout