That'd be some kind of debt 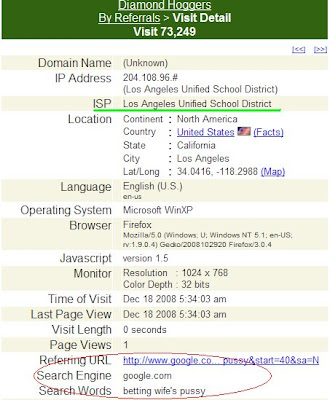 It’s the off-season, so another one of these makes the site. But I have to be honest with you, this one would make it anyways. In the heat of a pennant race in August. In a cakewalk.

And to top it all off, it was done from a school system computer! Los Angeles Unified School District!

I can picture it now. It’s the end of the school day. Guy has been on a hell of a losing streak. He’s losing at poker. He’s losing at blackjack. He’s losing at Connect Four. Guy has nothing left to lose but the mortgage; and well, ya know. Guy wants to dip his toe in the water and see if there’s any other guy out there who has ‘bet his wife’s pussy’. Guy heads over to house with shady characters who are no longer friends because he’s entered an underworld where he’s gambled way too much. He’s in over his head because his gambling habit cannot be supported by his salary as a public educator. There’s more money going out then coming in. He is left with no choice.

Related Items
← Previous Story Reader from Apopka, FL wants to know 'what to do and what to eat to have big dick'
Next Story → A Country Boy Can Survive the Offseason