The editors of Diamond Hoggers are big fans of mafia/gangster movies. Before the season starts, Diamond Hoggers will offer a celebrity gangster’s take on the upcoming 2007 season. Today we welcome Frank Costello from The Departed.

You answer me one question: do you like little Ms. Freud sucking on that cock? Good. Sit down and listen or I’ll make sure that there is some other guy, putting his fat cock up Ms. Freud’s ass. I’m here to give my picks for the 2007 season, and keep your fucking eyes behind you, cause’ rumor has it there is a rat. When I headed over here to meet with ya’, WE HAD A FUCKIN’ TAIL!
I’m not for hop skotch or other fucking nimrod games. I don’t like foreplay, I just like to fuck. I stick my cock in, move it in and out, and I’m done. I use the woman as a wastebasket. I’m not gonna beat around the bush. The team that is going to win the 2007 World Series is none other than Tito Francona’s Red Sox of Boston. Who else did you think I’d pick? You say Mets, and I put a gun to your head. You say Yankees, well, he puts a gun to your head.
You see, I run a gang. The Red Sox, they remind me of a gang. The Yankees? They’re the mob. A mob can be nasty, but there is too much fucking around, too much sideshow-shit. The gang (Red Sox), will come at you from all angles. The mob on the other hand, they’ll just send one to do the hit. Let’s say I wanted to have someone fuck your mother in law; if I sent a mob to do it, there’d be one guy, one dick involved at one time. He’d show up, fuck her hard, maybe even make her eyes pop out of her skull or her clit fall off and receive 3rd degree burns on that cockstick of his. Now you send a gang, and you’ve got an all-out escapade going on. They’d be screwing that bitch in every hole she had, including ears, nose, mouth. She’d be done in no time. Not even able to move off the bed to make coffee or light a fucking smoke. That’s how I look at the Red Sox. When you have a gang you’re dealing with rather than a mob, you got big problems.
The problem is, in a gang, you got fuckin’ rats. In the Red Sox gang, there is a fucking rat involved. A fucking snitch. If there is one thing that can cause problems for a gang, it’s a rat. If you follow the Red Sox like I do, then you know right away just who that fucking rat is likely to be. That fucking Beckett. 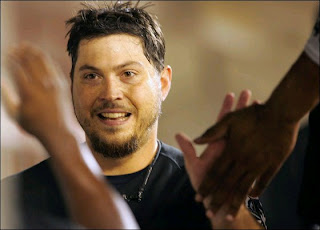 Teething, knawing, stealing. These are qualities of that fat-faced fuck, and also a rat. He even looks in resemblance to a rat. Athletes today, all they care about is getting their 6 figure paychecks, screwing any pussy they can get their hands on, and sailing out on their fucking yacht after their starts. It doesn’t matter if they give up 7 earned runs in 1 and 1/3 innings, they’re out doing the same thing as they did after the last shitty start, eating, fucking, and enjoying themselves. They never slow down to think and reflect. They never sip the wine and let it roll to the back of their throat to get that slow burn from the alchohol. They just do it for the substance, and the buzz. They don’t enjoy a cigar, they smoke the fucker. Beckett came in here and stole money from all the fans and the Red Sox in general. The whole situation is like trying to jack-off in a small hotel bathroom. The action is fun but the enjoyment isn’t worth the fucking trouble. He hasn’t been worth the cramped excercise. I say, we kill him. He’s the tail!

Oh yeah, Red Sox over the Philadelphia Phillies in 7. You mention the Toronto Blue Jays and you’re going to have this gun in your mouth. Can you say ‘Blue Jay’ with a gun in your mouth? I haven’t known anyone worth a fuck from Canada. NOW FIND THAT FUCKING TAIL!