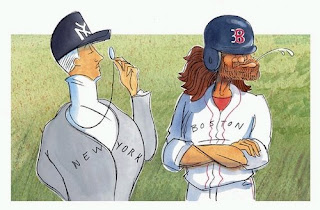 Tonight in Boston at Fenway, another good old fashioned donnybrook kicks off. There’s something special about the Yankees-Red Sox rivalry that makes a fan of the game feel like they’re watching playoff baseball, no matter what month it takes place in, even in April.

One game seperates these two teams by records, but when they play, throw it all out the window. There is no way to predict which one of these teams will come out and play better than the other. While often times in baseball we see the gayer sides of rivalries, with players friendly conversing or making friendly’s before games, I truly believe that these two teams do not like eachother, and that’s great for the game.

You know that if the Yanks don’t come out and play hard from start to finish in this series or any series involving the squad from Beantown, then people will have to answer to Big George. Now, I’m a tough guy and all, but I think that Steinbrenner would make me cower down to him in fear. Can you imagine him drilling you with questions in a 1 on 1? Can you imagine him yelling at you? If you are sitting there telling yourself you’d stand up to him and look him in the eye with pissy remarks, you’re a liar! Liar!

The history in this rivalry is too rich, with new chapters being written in every series they play. There’s no way we can even begin to recap why this rivalry exists. All we know is that when these two teams play, fans all around the league take interest, bars televise it nationwide, and ESPN as a network gets a collective hard-on. I don’t care what your favorite team or player does the next three nights, this series is leading off things on Baseball Tonight and Sportscenter.

If the ‘Sox wanna pretend they’re excited to meet the Yankees right now, they’re liars as well. They get to pitch to Alex Rodriguez 12-16 times this weekend, and he’s about as hot as I ever remember a big league hitter being at any point in my life. Trying to sneak a fastball by him right now is like trying to sneak a donut past the nose of Chief Wiggum.

Good luck to the Yankees, on the count that the wifey loves them, and of course if they don’t play well our editor George will need to be on suicide watch. If they play well I expect a few late night calls at 3:02 AM consisting of babbling, and who wouldn’t want that?

Related Items
← Previous Story Once they were few, now they are many
Next Story → A-Rod hits #'s 13 and 14