Grievances against the King

It’s now been over a year since Dusty Baker took over the post of head Red. Now that he’s our problem, there are some things we could do without. Actually there’s a myriad of stuff about the guy we don’t like. So let’s get started on this rap sheet, shall we?

–Supports Barack Obama (big shocker there)
–Likes change. Once again, sucks puss. Not a good quality for a manager whether you’re talking leaders for the country, lineups, or pitchers. Especially pitchers with young, fragile arms.
-Gets swept by the Pirates. Regularly.
-Constantly seems to be complimenting young players on opposing teams that beat the Reds, yet is resistant to use his own stable of youth.
-Allows his teams to bat out of order. If he were an NFL head coach this would be equal to not being able to manage the clock, only it’s worse because baseball managers don’t have to know nearly half the shit that NFL coaches do.
-Shoved Corey Patterson down our throat for an entire big league season and tried to feed us lies about Patterson being a capable major leaguer during that entire season.
-Turns 60 years old this year. Now qualifies as a crotchety, old windbag.
-Has produced only 2 first place finishes in 15 seasons as a skipper.
-Got an assist in ruining the career of Mark Prior and making Kerry Wood a permanent reliever.
-Employs Dick Pole on his staff. Okay, so maybe this should be a positive but is still questionable at best.
–Frustrates Homer Bailey.
-Probably still has a soft spot for the Cubs and Giants.
-Spends too much time in Jazz clubs.
-Has peglegs.
-Hit Ken Griffey Jr. 3rd until Junior was traded, at which time Griffey became a 7-hole hitter for the rest of the season.
-Too often features a clueless look.
-Pours liquor out with Red Sox Nation: 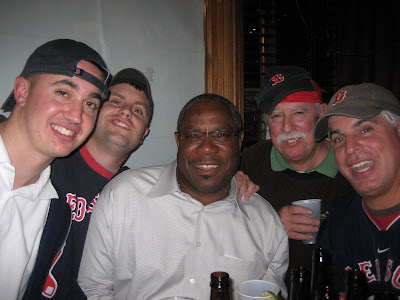 The Reds feature a young roster of talent that Dusty will have his work cut out for him in destroying. Now if the Reds play as poorly this season as we expect them to play, King Dusty will be shitcanned without a doubt. And we won’t feel sorry for him.