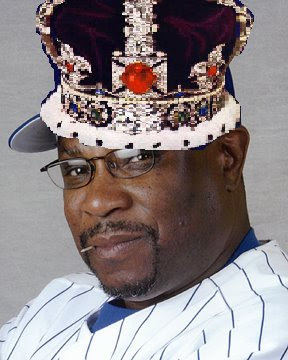 Last night Dusty Baker made me like him even more than a do as a caricature; although I do hate him as a manager. He is King Dusty. Ruler of the Reds. Last night I was watching the game at the bar, when from the corner of my eye comes the flailing king, squaking and carrying on. How bad do you wanna see him with a royal robe or cape on? How bad does he need a royal scepter? It’s his fucking kingdom, and he’s calling the fucking shots. Got it? He can hit Corey Patterson 3rd if he wants to. He can double switch our best run producer out for a defensive replacement in the 5th inning if he feels like it. He’s royalty. He’s chivalrous.

King Dusty earned two games to sit on his throne in the clubhouse while a guy like Mark Berry (third base coach) calls the shots. We’ve lost 4 in a row and now our perfect (as in, perfect guy to manage this team of gutless players) manager is not allowed in the dugout. Watch us fucking win 2 in a row.

Over at Fire Dusty Baker, they’ve decided to call it a stalemate for now and they’re talking steaks. The only thing is, King Dusty doesn’t like steaks; he likes to nibble on rich lamb legs. He also sips red wine from his royal chalice and gurgle the bubbles while his nubian beauties massage his peg legs.