Back in August when Adam Dunn was traded, he became the inaugural member of the Diamond Hoggers Hall of Fame. To get into this distinct club, you must do something on or off the field extraordinary; as deemed by our strict board of advisors. Every year in January we will induct two new members. However new can be inducted at large during the course of the year for an extraordinary event or circumstance (see Dunn). The members do not have to be arbitrary. They in fact can be an event. A place. A baseball bat. Anything. While only players have been selected so far, it remains to be seen what crosses through the doors at the Diamond Hoggers Hall of Fame.

Today, we present Lenny Dykstra with his induction into the DH HOF.

Leonard Kyle Dykstra; better known as ‘Nails’, was born on a mild February 10th day in 1963 in Santa Ana, California. Dykstra’s finest year came in 1993, when he was larger then life in the baseball world. Opposing center fielders spoke of the battle grounds he roamed in center field; saying that the area in Veterans Stadium looked like a “war zone” after 9 innings of Dykstra spitting tobacco everywhere out there. That year, Dykstra played in 161 games and scored 143 runs for the NL Champion Phillies. He finished 2nd in the MVP voting, drawing 129 walks from the leadoff spot and stealing 37 bases.

The biggest hit of Dykstra’s career was in Game 3 of the 1986 NLCS against the Houston Astros. It was a 2-run homer in the bottom of the 9th at Shea Stadium that gave the Mets a 6-5 victory in a crucial game that would put one team or the other up 2 games to 1 in the series.

After reading about Dykstra in The Bad Guys Won, Dykstra was by all accounts; a guy who we’d very much have enjoyed being pals with. He not only played hard, he lived that way. He was afraid of no bet, no dare-devil act was too great for him to attempt. He was the real article.

We ran a post on Dykstra last year. It really just cut deep with us. It is what Diamond Hoggers is all about. A good old throwback ballplayer who enjoyed a chew and playing hard. Here is an excerpt from that post on our newest inductee (originally written by Buster Olney):

I have my own favorite Lenny Dykstra story — from 1993, I believe. I was covering the Padres and I needed to talk to Dykstra for a story, so I staked out his locker on a Sunday morning. At about 11:45 a.m., a little more than an hour before the first pitch that day, Dykstra trudged into the clubhouse and he looked like he had a very rough night. I was standing right next to his locker as he sat down, and I remained there silently as he got settled — but somehow he seemed startled when I spoke. “Whaaa?” he replied. “I’m Buster Olney of the San Diego Union-Tribune, and …” He looked up at me with puffy eyes the way someone stranded in the middle of the desert squints at the sun, holding a hand above his head to shield his eyes. “Dude,” he said, “it’s really early.” “It’s almost noon. The clubhouse closes in about half an hour.” “Dude, can we do this another time? It’s really early.” His tone was perfectly pleasant, and yet it was clear that Dykstra was not going to entertain the questions I had planned nor could he possibly be available to play in the game that day. I assumed, as I returned to the press box to watch the game, that Dykstra would be scratched from the lineup because he was clearly a mess. Ah, no. He led off with a home run and bounced around the bases like a gymnast. It was a different time then. 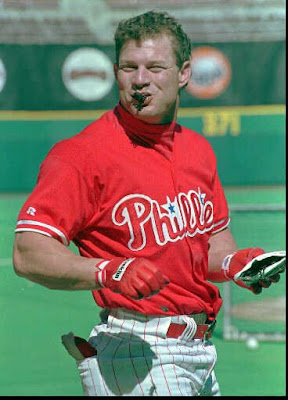