By TheNaturalMevs on November 2, 2008 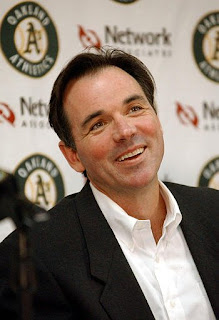 So you think you can build the next Tampa Bay Rays cinderella story? Do you think that if you were given 30 years to turn the Pittsburgh Pirates around that you would be able to do it? (God help you).

If you own a PS3, Xbox 360 and PC you’re in luck. The game will ship this winter for those consoles.

The details are in blurb form now, with more coming in the upcoming weeks.

Career mode plays out over a 30-year period with the eventual goal to land your GM in the Hall of Fame. The game also features an Online Fantasy mode where up to 30 managers in the league can go head-to-head and compete at out-witting friends.

Beane plays the role of mentor, offering advice and guidance as gamers work their way through the intense competition of the Major Leagues.

Obviously, this game is going to be incredibly time consuming. I’ll admit, it sounds sweet. I remember how I felt when NFL Head Coach when it first came out. I bought into the hype and invested a ton of time into it, and it was a piece of shit. It was a dog and pony show. I wasted hours of my life on something that didn’t work. If done right, this game could be the crown jewell of baseball junkie’s video game collections. If done poorly, it will get blasted on the walls of this very blog. But please for the love of God, let it be done right! This would be sweet.

“From negotiating trades to scouting new talent, MLB Front Office Manager has all the complexity and realism I could hope for in a game that is simulating what it means to be a Major League Baseball manager. I’m excited to be a part of a game that gives people a real world experience at what it’s like to be in my shoes and take on the responsibility of building a Major League Baseball team.”

Every year I’ll probably sucker myself into buying MLB2k8 regardless, but I’d like to advise everyone like me who gets excited about this game to make sure you rent it first; especially since it is in its first year of development. There will probably be some parts of the game that are very cool. There will also be parts that make you want to break parts of your entertainment center because they are mind exploding glitches. Or you can stay tuned into DH and we’ll keep you posted on our reviews and what we hear is good about Billy Beane’s video game.