Look at that street thug. Like Razor Ramon, he just oozes machismo. I’ve been saving this one for a rainy day, and even though the sun is shining it’s friday and in the spirit of the weekly holiday that friday provides us with, I’m gonna go ahead and let you have it with this little dingle-berry of baseball tale.

That guy is Brian Jordan, Brian O’neal Jordan. 1999 All-Star, and also he played Defensive back out of college for the Atlanta Falcons after graduating from University of Richmond. This isn’t a biographical post. Just setting the mood for my tale about this dipshit.
The year was 2005 and the Braves were in town playing my Redlegs. George had come to town and we had decided we were going to try and put enough alcohol down that would make John Daly cringe. We did just that and one evening we obtained some rather close seats by the Atlanta Braves dugout. The Braves were busy putting a series-long ass whupping on my boys, and I didn’t appreciate it too much; especially after editor George bought me a couple stiff Jack and Cokes.
Now I’m not a huge proponent of heckling ballplayers; anymore. I know it’s childish but when you’re at the ballpark as much as me, sometime you just can’t help it. I’ve knocked that stuff off pretty well, because in my old age I just don’t have the energy for it anymore. I’m just a tried old man. Every once in a while a spark lights inside me and I’ve just gotta fuck with someone. When this ‘spark’ is aided and abedded by alcohol, well you better look out. No one’s safe, unless you’re one of my boys. Brian Jordan was not one of my boys.
Now if you’re gonna heckle you better come strong. You better not bring any lame shit. You gotta ask Kevin Mitchell if his thighs chafe. You gotta call out Jason Werth for being a hound-dog and checking out women during the game. You gotta make fun of how much candy Jose Mesa eats and let him know how he made you feel in game 7 of the World Series, 1997. You gotta have something that will strike a nerve, if you’re going to be a true pest.
On this day, and I don’t know what made me do it, I just kind of got annoyed with the Reds losing, all weekend. I just got sick of looking at Brian Fucking Jordan. I remember it clear as day. He was hitting .233 right then. 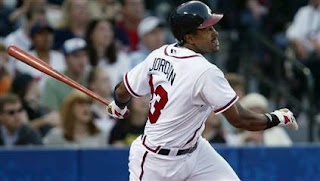 Brian struck out, and it wasn’t just a K in which he went down looking on a full count. It was one of those at-bats which makes you ponder the record of the quickest fucking strikeout in the history of baseball type of at bat. STRIKE 1! STRIKE 2! STRIKE 3! All three with monstrous hacks, you know? Like he was swinging a sword, very Dunn-esque.
Mr. Jordan returned to the dugout looking rather confused and pissed off, staring down anything in his tracks. Don’t look at me like that, shit-dick, it’s not my fault you can’t hit anymore. It started off rather innocently:
“Hit your weight Brian. Jeese, hit your weight. Is it that hard?”
This gained some chagrin from Brian O’neal Jordan. He turned around and gave me another stare/scowl. I stared right back, you know, being the hardass that I’m not. That’s the best medicine for a ballplayer, just stare at them, don’t say anything, just stare. Like Nicky Santuro would say, ‘fuck em. they wanna watch me I’ll watch them right back.’
An inning or so passed and I noticed that Brian Jordan had actually been pulled from the game after his fabulous at-bat. Seemingly on this day everyone was joining in the fucking hit parade on the Braves. I think Eddie Matthews crawled out of his grave to hit a ground rule double. Rafael Belliard hit for the cycle.
Everyone but Brian O. Jordan that is.
What I said next completely floored Jordan and a few of his comrades.
“Hey Brian, you should go back to football. You’re hitting .233, you’re done dude. Go back to football.”
This really, and I mean really fucking hit a nerve with this guy. Aparently baseball is his favorite sport. He turned around, glared me down and said:
“You want me to come up there and kick your ass?”
Uh-oh, now the shit was on. I had said something that reminded him of his days of being led to glory by Jerry Glanville, and those old Red Atlanta Falcons uniforms that they wore when they sucked every year.
“Well Brian, at least when you got toasted by wide receivers you wouldn’t have shit heads like me fucking with you, go on- go back to football, you can’t hit anymore,”
That was it. I have never been so certain that a ballplayer was coming to join me in the stands to kick my ass. He almost, like, made a move but he wasn’t smart enough to figure out how to climb over the dugout, so he just kept staring–naturally.
As he stared I became startled. The words were flying out of my mouth as editor George began to laugh and say ‘this guy’s going to blow up if you don’t stop.’
“Yeah, go back to football. You aren’t even hitting your weight.” I just laughed at him in his face. Then Brian Jordan did exactly what you expect a guy with the middle name, “O’Neal” to do. He tattle-taled on me.

“Mr. Security guard, if you don’t shut this kid up, I’m going up there and kicking his ass,”

It was the same african american security guard that has been watch-dogging the visitors dugout in Cincinnati since a was a kid. He’s not a bad guy, but when it comes to doing his job, he’s all fuckin’ business. I guess I was messing with his business that day, I’d be in a much fouler mood if I wasn’t a real cop though, so I understand.
The “cop” came over to the railing. He told me if I didn’t stop, not only would he throw me out of the stadium but before he did he’d let Brian O’Neal Jordan come up and kick my ass. I guess that’s justice for you.
I gave up, for an inning or so. No “cop” in sight. It was time to give Brian a few parting shots, afterall, he fucking told on me. Dick.
“Brian, the Falcons just cut Ray Buchanan. You might have a shot at making their team out of training camp,”
Then Terry Pendleton and Pat Corrales (who managed the Tribe to a 102 loss season in 1985) began to come to the aid of their friend, Mr. Jordan. They started to stare down and I just looked back at them both. “Yo, Tee-Pee! Whattup man?”
He just looked back at me and answered with “That’s enough. That’s enough. Enough.”
Alright Terry, you can suck a dick too. Let Brian fight his own battles dickwad. I’m sorry that I hurt his feelings but all I was trying to do is help your team really if you think about it. If you don’t want my help, fine.
I was bored with making Brian Jordan cry and question his own athletic abilities. It was time to move on. I slid behind Pat Corrales and started to whisper, like a drunk would, every so quietly.
“Corrales. Coooorallles. Co-Rales. Cooo-raleighs” in a mexican voice, kind oflike Eddie Guerrero, or your standard mexican would.
He turned around, in a flash. In that same Mexican voice I just spoke of, he went off.
“What the fuck is wrong with you man? You got something wrong with your head? What the fuck is your deal?”
I just stared back. That’s my Brian Jordan story.