Home / Mice and Men / A fly on the wall: Yankees clubhouse

A fly on the wall: Yankees clubhouse

The Yankees were swept out of Boston the last time these two teams met, and big George was not happy. We were lucky enough to be a fly on the wall inside the Yankee clubhouse, before the Yankees prepared to take on the Red Sox this weekend at Yankee Stadium. Here’s what Steinbrenner had to offer, top secret insider information of course, then again, everything he says he’d like to qualify as such.

Steinbrenner: Gentleman, you all know why I am here today. This reminds me of a trying time, an unhappy time. A time when I was stuck as a P.O.W. in Hanoi, you’re probably wondering how I made it through….
Mattingly: Boss, you were in Vietnam?
Steinbrenner: Mattingly! Mattingly! Do you want me to shave that moustache with a fucking Bowie knife? Then I suggest you shut your god-damn mouth when I am addressing my front line of officers! Now…. You all know how badly you embarrased me the last time we were in Boston. I don’t have to go back over that. As a P.O.W. I realized that soldiers have to accept the way things are. That is what I expect you all to do before this weekend’s series. We will prevail….
Melky Cabrera: Boss, what was it like over there?
Steinbrenner: Well Cabrera, I’ll tell you what it was like. Lots of rice paddies. We handled ourselves like men would. We loved our enemy like he was our best friend. The Viet-cong were all we had to hang onto for hope, it was life or death, and they decided our faith. Does anyone see what I’m getting at here?
(………..pause, silence…………..)
Steinbrenner: What I’m talking about here boys, is the way I want you to feel about eachother, and the way you feel about the Red Sox as a squad. Anyone see the paralells here?
Proctor: Fuckin’ kill em all bitch!
Steinbrenner: Oh, is that right? Well, let me ask you something Steve. Is that your name? No matter, I don’t learn names of the people who can’t tuck their pussy in enough to pitch with a hangover. You think that I couldn’t have made things happen in Vietnam had I been out the night before? HELL NO! It would have been a privlidge to have had a drink at those times. Anything to dull the pain. We weren’t that fortunate. You mean now are weak. You need those temptations to strive you through the battle. Now, you will talk when I tell you to fucking talk Proctor.
Proctor: (sits silently, eyes well up with tears). 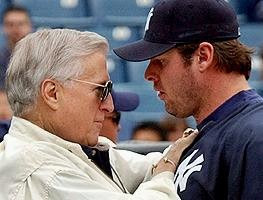 Steinbrenner: Moving forward, Jason, stand up here. You look like you’re sweating, does it make you nervous when I speak to you all Jason?

Steinbrenner: Really? That’s interesting. Jason, I want you to make yourself stop that immediately. In times of war, we can’t let the nerves on the inside change the face of what is on the outside. I expect you to be a soldier son, stonefaced, no emotion. And especially no fucking sweating.
Jason Giambi: Um, I can’t help it.
Steinbrenner: Have a talk with those fucking weak sweat glands of yours and tell them to stop it.
Jason Giambi: but boss….
Steinbrenner: DO IT NOW!!
Jason Giambi: (closes eyes) Please, please stop it. Please stop this normal human function.
Steinbrenner: I said stand up!
Giambi: (stands up, eyes still closed)
Steinbrenner: Open your god-damned eyes! What the fuck would you do if there was a trip wire in front of you and you were standing there all starstruck like with your fucking eyes wide shut?!?
Giambi: You’re making me nervous, Sir.
Steinbrenner: Aw, Jason’s nervous fellas. That’s cute. Where did I ever mention that it was ook for a soldier to be nervous? Do you know what General Patton, who is a good personal friend of mine, would have done if one of his soldiers would have indicated he was nervous? And didn’t I just talk about nerves shouldn’t be a factor in times of war?
Giambi: Um, I don’t know?
Steinbrenner: I’ll tell you what Patton would have done. He would have taken his thumb and index finger, grasped your balls within them, and given a slight tug. With that tug he would have dis-membered your shrunken ball sack, and fed them to you while you begged for another pair of them in your mouth.
(Steinbrenner places his hand on Giambi’s chest)
Giambi: What are you doing, Boss?
Steinbrenner: Quiet Giambi! I wanna hear, and feel the heartbeat of one of my men.
(pause…….Steinbrenner inches ear close to Giambi’s chest, full sweat ring going down front of jersey)
Giambi’s nervous heart: beat-beat-beat-beat-lup-dup-lup-dup-lup-dup-luppy-duppy-LUB-DUB!-LUB-DUB!
Steinbrenner: (In whisper) Aw thats nice. Yeah that’s really good…..
Farnsworth: (From back of the room, quietly) What a sick, twisted fuck. Jesus.
Steinbrenner: WHO SAID THAT! DO YOU WANT THE VIET-CONG TO FUCKING HEAR US!?!? FUCKING CHILDREN! THATS WHAT YOU ARE!
Giambi: Can I sit now….
Steinbrenner: That hearts beating fast Jason. Too fast for the good of this troupe. I want you to tell it to stop. We can’t have that in here. It’s too loud, too much noise. They hear that thing doing all those whacky nauticals, and we could get the whole squad ambushed.
Giambi: (Closes eyes, hard) Please heart, just stop beating so hard, just stop beating. I don’t care. Just stop! (heart beats faster, full anxiety attack, sweat pouring profusely off Giambi brow).
Steinbrenner: Sit down Jason, I can see this isn’t working. You’re lucky I don’t relieve you of your duties here. Now, lets show everyone how a real soldier reacts with his life on the line…. Alex, come hither. 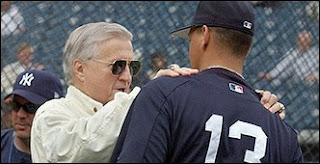 Steinbrenner: (clutching A-Rod in his grasp, sternly and assertively) Alex, do you know how much you mean to me son? Do you know what you mean to this squadron?

Alex Rodriguez: Well Boss, I certaindy know how I feel….

Steinbrenner: You’re our god-damn general Alex. Our fucking lifeline. If you or I was catholic, or religious, I’d want to be your Godfather at your baptism. I’d want to pour cold holy water on your dick Alex. Do you know how I feel about you?

A-Rod: I know how you feel now mayn.

Steinbrenner: That’s right. Now, inch closer to me. Stand still. I want to listen to the heart of my general.

Steinbrenner: You hear that men? Nothing. Not even a god-damn pulse!

A-Rod: (Smiles like the golden boy general he is)

Steinbrenner: Alex, you’re giving your first lieutenant a massive hard on right now. My cock hasn’t been this hard in many, many years. You see men, a real soldier doesn’t have a fucking heart beat! His heart beats for nothing, no one! He can escape any situation because he’s already dead! He doesn’t have a soul! This man isn’t even living right now.

Steinbrenner: Sit down Alex. Thank you for that. That was moving.

A-Rod: I din’t do nothing mayn. Your wedcome.

Steinbrenner: Derek, that Viet-Cong Matsuzaka just grabbed you in a bear hug and pulled the plug on a grenade out there. You’ve got approximately 3.4 seconds before your whole squad is blown into a firey hell. What do you do?

Jeter: Um, put on my cape, put the viet-cong in a strong head-scissors for fun, fly and go get the pin, put it back into the grenade correctly, make some chicken soup and sliced apples, and then insert the grenade back up the Japs ass?

Steinbrenner: (blushing) Alright then. Next question. Cano, why do you think Schilling’s sock had blood on it back in the 2004 series with us?

Cano: Well I’ve heard different things actually. I believe he was truly wounded, but continuing into battle like a real soldier, right?
Just like you want us to do, am I right?

Steinbrenner: No you’re not right actually. The truth is, and I don’t wanna tell you all this but you’ve given me no choice….. before the game, I crept out of my bunker into the deep throws of the ass end of the enemy bunker. I knew Schilling was pitching that night and I wanted to win the war. I took out my knife, and (making slicing motion), CUT his fucking Achilles tendon and then slithered away as he howled, back to my bunker.

Steinbrenner: That’s right men. I did it for you and you let me down. You let the Viet Cong win. That was 2004. This is now, we’re still in this war, and we can still prevail starting this weekend. This is the first chapter after the harsh defeat, how will we respond? I look at this weekend like it’s the battle of Saratoga.

Torre: Alright, enough…that was the World War I; George, World War I!!!!! And stop lying to these guys. You weren’t in ‘Nam! You didn’t even fucking want to be a cook for that operation!

Steinbrenner: Enough. You all know what you have to do. Get it done. (Walks out of room with overcoat on. Hands folded).

Related Items
Next Story → I can now die a happy man; Shooter McGavin in a baseball movie!