Home / Duuude are you fucking serious? / I can now die a happy man; Shooter McGavin in a baseball movie!

I can now die a happy man; Shooter McGavin in a baseball movie! 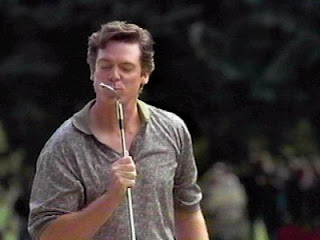 My life is complete. I don’t need anything else. The word is out and the word is that our good friend Christopher McDonald (aka Shooter McGavin) of Happy Gilmore fame, is going to play Joe Dimaggio in an upcoming made for television series The Bronx is Burning.

No worries, Steinbrenner and Billy Martin will be there too for you Yankee faithfuls. However, the fucking lead of this show is clearly Mr. Mcdonald.

My current roomate, from Chicago (irrelevant unless you wanna know where to party with Shooter), told us a story about our friend McGavin one time. It went something like this:

“Yeah man, and we were at this private party at the PGA tournament and all the
sudden you’re not gonna believe who fucking was there…..Shooter…… Shooter
McGavin was there! He really was cool as fuck, just as you’d imagine (and we
would). We ended up getting piss drunk with the guy and by the end of the little
event we had him telling us stories about his glory days and you guessed it, he
gave us a ‘Shooter’.”

When asked what exaclt a ‘Shooter’ was, this was the garnered response:

“Well, you know, he’d like slam a double shot of whatever we wanted him to, and
then he’d whip his hands up like they were 6-shooters and holler out ‘Shooota’.”

Yeah, he’s a dead ringer for Joe Dimaggio. No doubt about it. No matter how painful this ESPN mini-series is (bring back Playmakers, fuckers), I’m now going to have to watch every moment of it because of Shooter being in the mix. There is no reason that he has any business playing Dimaggio, he’s not that ill-tempered. It should still be very entertaining, as Shooter always is.