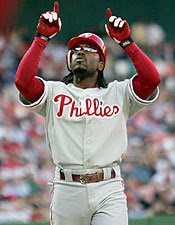 Now here is one we couldn’t have predicted with all of our collective knowledge. Jimmy Rollins, say it with me……JIMMY ROLLINS is leading the National League with 5 homeruns right now. I think you gotta like Rollins for the fact that before the season started, he declared warfare on the entire National League, saying the Phils were going to open up a can of whup-ass on everyone else in the league, en-route to the World Series. Well, Jimmy is at least doing his part which is more then we can say for Ryan Howard the reigning MVP.

Not to disregard Mr. Rollins as a homerun hitter completely, he did hit 25 long balls last season. But the fact that he’s outslugged the likes of Dunn, Cabrera, Delgado, Soriano, and the entire Washington Nationals ballclub to date is an impressive feat.

Even with the big night from Rollins, the Phillies still lost the game to Tom Glavine and the Mets 5-3. This Phillie ballclub is not living up to expectations (hmmm Deja-vu), and it’s not the only time that Charlie Manuel held the reigns to a talented but still underachieving team (Cleveland). If they don’t turn things around soon, they’re going to kick Manuel’s fat goose faced ass to the curb and throw some hydraulics on that fine oiled fuckin’ machine.

They’re not dead yet, but it seems like this Philadelphia ballclub doesn’t seem get rolling until it’s too late. They’re also making some expert predictions like my own look awfully stupid.