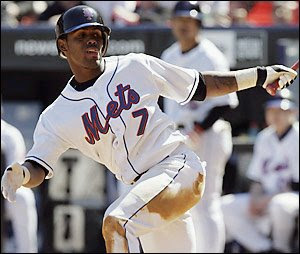 He does it all man, except dip. He hits for average, hits for power, has speed, runs the bases like crazy, steals bases, plays a slick defensive shortstop and is the catalyst for one of the better teams in the National League. He nearly took the Mets back to the World Series last season, and all at a ripe young age where most players are just trying to get out of the minor leagues. There have been debates as to whether or not Reyes is the best shortstop in the Big Apple over some guy named Derek Jeter.

In the spirit that is the week of our fantasy draft, I have to say I’d love to nab this guy. I expect him to have a huge year, putting up Robby Alomar-esque type #’s when Robby was in his prime. 40-50 stolen bases are a given with this guy, and he’ll reach 20+ homers. With that speed he isn’t going to have too many prolonged slumps where he goes hitless. If he can just stay healthy he’s going to have a huge year and justify all those people who are selecting this guy so high in their fantasy baseball drafts this spring.

He’s also going to score a shitload of runs. It’s not out of the question for him to cross home plate 125 times this season. With David Wright, Carlos Delgado, and Carlos Beltran hitting right behind him, the Mets have a mini-Murderers Row working at the top of the lineup. People are always quick to point out that Shea Stadium in Flushing, New York is not a place for offensive players to flourish. I disagree, while it might not yield the long ball like some stadiums around the big leagues, it’s perfect for a player of Reyes’ skill set. With the spacious outfield and deep gaps, Reyes turns doubles into triples, and triples into stand up inside the park homeruns. Not to mention he easily scores from first on anything in the gap.

Reyes will also benefit from one of the best managers in the game, Willie Randolph. The Yankees might have missed the boat on snagging the next great manager in the game. Randolph is one of those special game managers that can really feel when his club needs a spark and while excercisng careful conservative decisions for most of the game, isn’t afraid to turn on the aggression at times to put the pressure on the opposition. I expect Willie to send Reyes early, and often, and late, and well, you get the point. Reyes will have every opportunity to reach 70 stolen bases this season and in the seasons to come. My guess is he has a non-stop green light to steal whenever he wants.

While Beltran and Wright are getting much of the hype, this 23 year old youngster may very well become not only the best player on the New York Mets, but the best player in the National League.