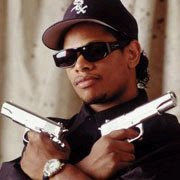 The editors of Diamond Hoggers are big fans of mafia/gangster movies, and just Gangstas in general. Before the season starts, Diamond Hoggers will offer a celebrity gangster’s/gangsta take on the upcoming 2007 season. Today we welcome Eric “Eazy-E” Wright from N.W.A:

Yo-yo-yo what up muthafuckas from the New York to the LA? I’m Eric, but some you skeezies might know me betta as Eazy. I’m comin’ to you from Rose Hills Memorial Park, in Whittier, California. Also known as the final resting spot for Eazy-muthafuckin’-E, biatch. We brothas don’t live long in this game, and I’m no different. I was something that was real, a Real Muthafuckin’ G. I was tangible and so, I shall perish. But fuck that’, cuz that ain’t what they woke me up from my fuckin’ nap for, skitty. I’m here to give you my outlook for the 2007 Major League Season.
You might think at first glance that a nigga like me be trippin’ and sippin’, but you just crazy cuz my niggas kept’ gettin’. Well if you don’t understand me breakin’ it down for you, that means that you might think by lookin at my attire, a nigga like me would be a Chicago White Sox fan? Well fuck-that, cuz I ain’t. Ain’t nothin’ good eva came outta that pussy ass hoe shit Chicagoland. I once had a hizzie from up in that and she gave me crabs. I had to shampoo that shit with a comb and this medicated shit for two weeks to get those motherfuckers out of my shit. For that, I hate the White Sox. I wear this hat for identity. This signals to my niggas that I’m here to ass kick and name take. Niggas like me, we be fo’ real. Frank Thomas and Robin Ventura rocked it up in there when I was around, and they couldn’t eva get it done.
You might think at once that I’m not a baseball fan, ditching that shit for the ballas of the NBA game. Well I’ll leave that shit to fake ho-asses like puff daddy and that little bitch Usher. They can suck my muthafuckin’ dick, cause the NBA doesn’t do nothin’ but set brothas back for 100’s of years. Hoe ass niggas. Fuck them. I do like me some baseball, always did nigga.
Man I miss the life. Writin’ rhymes and humpin’ hunnies. MmmmmmmMmmmmmmmmm. Aw shit man, I can’t even get to thinkin bout’ that shit, or tear drops my eye. I’ll start trippin on ya, ya’all fuckas. Lets just say, stay real and keep humpin them honey’s as long as you can nigga, cause it’s a lonely place down here in the ground. And you think it’s cool being a gangsta, well fuck ya, it cool. But there ain’t no one down here among the dead to listen to your shit. So if you gonna roll out and send yo’ little nigga into the rain, you betta send him out with a muthafuckin’ rain coat. That AIDS is some nasty shit.
It’d be no secret I’m from the L to the A to the mutha’fuckin’ L.A. West coast till I die nigga! In honor of that, I’m going with the Dodgers. The muthafuckin’ trippin Dodgers over the giddy muthafuckin Anaheim Angels of California of fucking 9th precinct in the World’s Series, in a 7 game fuckin’ masterpiece. Watch out for that James Loney cat, that nigga be trippin all in himself. He reminds of Darryl Strawberry but better lookin. Some say he look like me.
So I’ll leave you with that. Why we die niggas? Why we die? I’ll be up in heya holdin’ it down with the likes of Tupac, Biggie, and the rest of the niggas gone too soon. Oh, when you out at the games this summer, and you be sneakin that Malt into Dodger stadium, don’t be a hater, don’t be selfish. Poor some of that shit on the ground for me and the homeys. We damn thirsty. Represent, G.