What the hell is this?

Not sure what picture I’m showing you above, but it appears to be friendly Minnesotans(?) – possibly twins, smiling and giving each other a hand hug.  Bad news guys, the Twins are not going to give you much to smile about, except the overwhelming flavor bomb you’ll get when you shove a jucy lucy in your cold weather thickened body.  Outside of Joe Mauer and (maybe) Josh Willingham, this team is void of any star power.  It feels like the Twins were on the verge several years and were trying to hang on too long in hopes of making a run.  It’s hard when a seriously tradeable chip is a homegrown hero who is impossible to trade.  This team is a long way away from the team that  won the 1991 World Series.

Let’s take a closer look at the Twins.

The Twins traded their highest WAR player player in Denard Span and another talented OF in Ben Revere for what they hope will be a deep starting rotation of the future.  The only SP of note for this season is Vance Worley, who has been the “other” pitcher in Philadelphia behind Roy Halladay, Cliff Lee, and Cole Hamels.  Worley is no doubt talented and we’ll touch on the other pitchers later.  All small market teams will go through this rebuilding process, but it’s unfortunate when their “up” cycle doesn’t produce more than a spattering of playoff appearances.

Let’s try for a second and focus on the positive.  If the 3-5 hitters have career years, it could be the best 3-5 in the AL.  If.  Joe Mauer is a great hitter.  He probably isn’t ever going to see power numbers like he did in 2009 with 28 dingers, but he will always hit for average and gets on base when he doesn’t but a ball in play.  Josh Willingham had a good year last year but it weighted with a great first half.  He was a trade deadline target of about a dozen teams, but for some reason they Twins held on to him even though there is no way he is around next time the Twins are good.  Justin Morneau is a bit of an unfortunate story – a great player really torn down by injuries.  I don’t even know if Morneau is above replacement anymore, but his history with Twins says that he will start until someone clearly better comes along.  The other potential bright spot is Trevor Plouffe, who showed serious power last year over a short stretch.  Can he carry that over and be more consistent in 2013?  I’m thinking it’s a stretch, but it’s not out of the question.

Here is Pluoffe starring at a ding dong

Here is where the Twins want to make hay over the next 5 years.  Worley. Scott Diamond and Liam Hendricks are all 26 and under and talented.  And they acquired two more young arms, Alex Meyer and Trevor May in trades this off season.  A glut of pitchers is good ting to have, especially since injuries and inconsistency often take down many prospects.  I can see this rotation being tougher opposition than most will give them credit for.  If Worley bounces back and is closer to his 2011 season, when he posted a 3.1o ERa with 119 K’s in 130 innings, then he is the right guy at the top.  If not, the Scott Diamond will be taking that role.  He’s not the same pitcher as Worley, but he keeps the ball on the ground, doesn’t walk a ton of guys, and that 3.54 ERA will play. 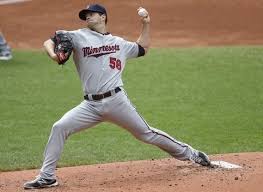 The Twins know what this year and probably the next are.  Rebuilding.  They didn’t go as far as the Astros, but they are trying to build around a young pitching staff.  That is a good plan in theory, and I like to see smaller market teams come up and get some time in the sun.  If all these young arms hit, the Twins will have plenty for themselves a couple to flip for the bats they will eventually need.  I know….killer plan.  Terry Ryan knows how to get a hold of me if he needs details.