Reds head to Arizona for the clash of two phenoms 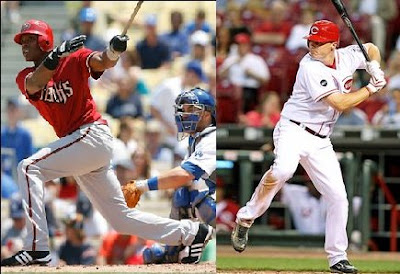 Tonight the Reds play the first of their West Coast games this season. While they’ve never enjoyed a ton of success out on the other side of the country, there are some things we’re really looking forward to seeing.

Our favorite two young players in the entire game will be center stage for this three game series, and they’re both paying big dividends for their club. Jay Bruce and Justin Upton came out of the same 1st round in the 2005 MLB draft, and now some 4 years later they’re both getting it done at the MLB level despite slow starts.

Upton enters tonight’s series with a 17 game hitting streak, the longest in the National League other then Ryan Zimmerman’s quiet but impressive 28 game hitting streak. Upton has hit .393 over the life of the streak, with a .754 slugging percentage and 6 home runs.

Bruce’s streak has been a little more modest, but he’s also seen some power during the life of his streak. Bruce had two 13-game hitting streaks last season as a rookie, but we hope he can parlay this one into 20 games or more and gain some notoriety. He’s only amassed one multi-hit game during his hitting streak but has 5 home runs and 8 RBI during it.

Each of these guys will be in right field and in the middle of the lineup in this series. Fans who watch these games get an excellent glimpse of the future of the sport. Both of these guys should be around a long time and making an impact. It’s too bad these guys only meet up a handful of times each season. Keep an eye on this series because whichever one of these guys can continue their contributions; that team should take the edge in the series.