Red Sox are catching Yankees at the wrong time 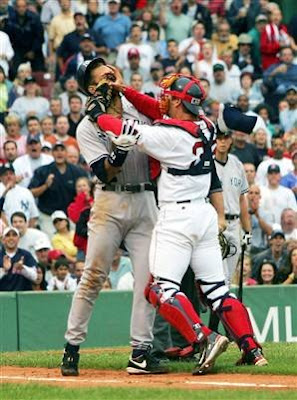 This post is by popular demand from a Yankees fan who is a good friend of ours. Let’s do this thing for the third time. Baseball’s most heated rivalry takes center stage once again on display for the entire baseball world to see. This is the one series that every Yankees fan makes sure he is home for. Everyone in Boston has their plans set for the next three days. This is the one rivalry in all of sports that isn’t over-hyped.

The numbers right now are in the favor of the Red Sox. They’re 5-0 this season against the Yanks and have outscored the Bombers 38-23 in those five victories. That was a different Yankees team that Boston was facing. That was without Alex Rodriguez. That was a team with a cold Mark Texeira.

The Yankees are ahead in the biggest stat that matters right now. Games ahead in the standings. They enter this series one game better (34-23) then the Sox after 57 games played for each team.

You know what? We predicted the Yankees to win the World Series when this season began. We knew they were capable of this. We never backed off our prediction no matter who told us that they weren’t that good or didn’t have heart this year. I think this could be the best Yankees team in the past decade. They’re absolutely loaded. I was shocked to read in the most recent Sports Illustrated that of some 380 something MLB players polled, the largest percent of them said the Boston Red Sox were the favorite to win the World Series. The Yankees weren’t even listed on the poll. What a slap in the face. And how puzzling.

I have news for you. The Yankees are the best team in baseball right now. They’re better then the Dodgers (the best team in the NL) and they’re better then the Red Sox. My gut says the Red Sox sneak out 1 game in this series and the Yankees take 2 of 3. But they’ll have a chance to sweep. They’re a deeper, more dangerous ball club. Their defense is better. They’re healthier. Look at those lineups. It’s not even close in favor of the Yankees. Fans in the Bronx should feel good about this team and you’ll see it the next three days in Boston at Fenway.

Related Items
← Previous Story Don't feel bad Cincy, Albert Pujols does this to everyone
Next Story → Next Post