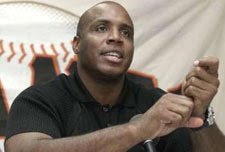 It’s now time for the first bold prediction, well maybe not the first, but the biggest prediction we’ve made yet to date in print. Ready? Barry Bonds will NOT reach 756 career homers in 2007. As we write this article, Bonds is sitting on 734 career homers, needing 21 to break Hank Aaron’s all-time career record of 755. We’re not suggesting that Bonds won’t reach the milestone at all, but we have more than a hunch that it will not be in 2007.

Bonds’ body is going to break down, and believe it or not, bad things do happen to bad people. When measuring bad people, Bonds sits in a class all by himself. More on that later, but the main factor in whether or not Bonds will get the record will be can he drag himself to the plate enough times in 2007 to have a shot at it. By looking at the figure of only needing 21 homers to get there, one would say the percentages are largely in Bonds’ favor. We agree, but after a slow start we see those percentages dropping signifcantly.

I see an April that will only see Bonds hit 2 or 3 homeruns. May will follow in what will only yield the same, while still playing in a large number of games. Bonds’ body will begin to wear down, and possibly mix in an injury that will cause him to miss some time. Even if there is no injury, before the mid-summer’s classic in July, he’ll be taking some significant time off to stay fresh for a Giants team that should be as competitive as it has been for quite some time. There’s a few more factors that will add in to Barry having 2007 be a large letdown for the 6 or 7 people that actually want to see him get the record. There are players out there that really don’t want him to get the record, namely pitchers. No pitcher wants to be the man that gives up #755 or #756. Talk about lists you do not want to make, pitchers will go out of their way not to serve one up to Barry. By mid-summer, when the All Star Game is in Barry’s homeland of San Fran, the talking heads will be wondering the same question: Can Barry get to 755 this season?

He will be walked more then ever before. The added pressure combined with his aging effects will cause him to have a decrease in power. Those that follow the game closely will be able to admit in the 130 games he played in last year, there were a signifcant amount of warning-track fly balls that ended in the result of a putout for outfielders. If he can get anywhere close to the figure, we give him some major props. Afterall, he’s probably under more pressure, much to blame on himself, than any player in big league history. There isn’t a soul out there that wants to see the devil wearing #25 break this record, and he knows it. The fact he’s been able to play for the past 2+ years with all the accusations is pretty amazing. It’s hard enough to hit a baseball when the factors are normal. Being able to perform like Barry has the last few years, under the scrutiny he’s been under is something amazing in itself.

Now for why we aren’t big fans of Barry Bonds. Back in 2002, as freshman in college, George and myself made the trip to Cincinnati on a saturday to see the Cincinnati Reds and the San Francisco Giants play. We didn’t want to miss the best player of our era play, and neither of us had ever seen him play. We saw bonds lash a double into the gap to break up a no-hitter by Jose Rijo. What I remember most about that game and Bonds is what happened after. We went down into the players parking lot to screw around, maybe get an autograph or two, or to just see some players. The Giants team bus was pulled up next to a chain length fence that seperated the players and their parking, and the fans waiting. Bonds boarded the Giants team bus and took a seat in the back, and was on his cell phone for 30 something odd minutes. George and I gravitated towards this area and little kids were begging for Barry just to look at them, just to look and wave. Even still being a kid myself then (I was what, 19), I felt for these kids and remembered the days of my youth when I would have killed just to have Darryl Strawberry give me a wave or the time Ken Griffey Jr. shook my hand the summer going into 5th grade. It was a moment I’d never forget. Kids are really what the game is about–kids are what keeps baseball great. At that moment I lifted this little boy up and held him up as high as I could, so he was right next to the bus window that Barry was sitting in. Bonds ended up hanging up his phone and sure enough the kids noticing it got louder just trying to get a wave, or even a glance from the legend. I soon realized it wasn’t going to happen. Barry was too “big” to even acknowledge the people who are mainly responsible for helping pay his million dollar salary. He didn’t ever look and the bus pulled away and Barry went off in the distance. Those few feet are the closest I’ll ever get to our modern Babe Ruth–whether he deserves this title or not.

In my mind that was all I needed to see to know he was the Devil.

Related Items
← Previous Story We're Die-hards and all, but…..
Next Story → Friends of the Blog