Home / Uncategorized / What the hell is going to happen in the second half? A brief preview

What the hell is going to happen in the second half? A brief preview 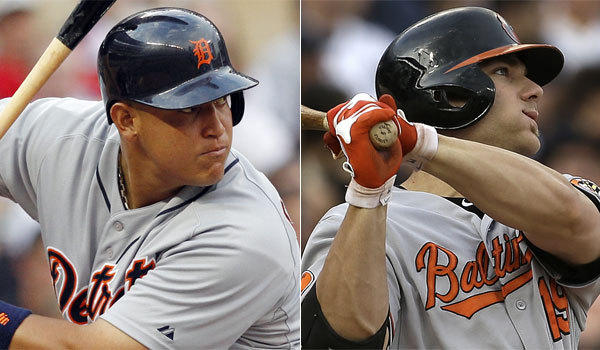 These two will be slugging it out in the second half

The first half of the season has been a great one.  Highlighted by Chris Davis’s home run bonanza, no hitters by Homer Bailey and Tim Lincecum, two brawls in Los Angeles, the upstart Pirates claiming the 3rd best record in baseball, Miggy cementing himself as the most dominant hitter since Barry Bonds and other great moments.  The standing may not look very much like I thought they would at the beginning of the season but they are nonetheless interesting.  Here’s where we stand so far in both leagues:

This isn’t really the mid point in the season.  Teams have played over 90 games.  They have less than 70 games to keep their lead or make up ground.  Buster Olney put together a list of the toughest schedules left among the contenders. (Insider)  Hint:  It’s the Royals, Braves have easiest.  I think the Red Sox and the A’s end up with the AL wild cards.  The Rays, Tigers, and Rangers will take the divisions.  In the NL, The Dodgers and Reds will manage to get the wild cards while the Braves, Cardinals, and Diamondbacks will win the divisions.http://diamondhoggers.com/wp-admin/post.php?post=14977&action=edit

What about some of the smaller plots?  Let’s see:

These questions and more will be on the mind of baseball fans for another few months.  We’ll get answers and most of us will have sarcastic things to say about it on Twitter.  Enjoy the second half.

Related ItemsSecond Half
← Previous Story Rank Relief: When Aroldis Chapman loses, he give up the long ball
Next Story → Your Saturday Baseball Post