One thing I can promise about Kansas City  and baseball…their fans hate Robinson Cano.  You may remember last year when fans felt like the roundish Billy Butler should have been in the home run derby even though he is more likely to win the doubles derby.  Well the fans let him know they were displeased.  I don’t know if that has anything to do with how the Royals will do this year, but they at least are trying to get where Cano’s team has been forever…the playoffs.  The Royals have longed tickled our curiosity as to whether they can make the leap.  This year, I don’t think they can, but they do.

Let’s take a closer look at the Royals.

This was one of the first and biggest moves of the off season.  Apparently the Royals felt like their lineup was sufficient and they needed pitching because they gave up a major prospect in Wil Myers (who probably should have been playing last year) for pitching reinforcements, particularly Shields, who will become their staff ace.  Davis can handle a spot in the back of the rotation.  Guthrie will slide into the second spot.

Will Shields show this kind of fire in 2013?

The Royals weren’t totally off base when they felt like their lineup was set.  There is definitely some talent here.  Lorenzo Cain has serious speed but needs to raise his .316 OBP from last year.  Alex Gordon was a 6 WAR player last year after many seasons of under achieving.  The offense will really succeed or fail because of 3 young bats.  Eric Hosmer, Mike Moustakes, and Salvador Perez.  These players have the potential the seriously impact the run production in a lineup.  Hosmer seemed poised for a breakout season last year, but seriously regressed.  Perez was on the shelf for much of the year.  Moustakes was the only one who contributed on a consistent basis.  Can these guys elevate?  The Royals are betting on it.  And then there is Billy Butler, who looks like he could hit 40 home runs, but never does.  Good hitter, better body. 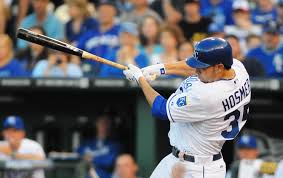 As mentioned earlier, this group looks very different than it did a year ago.  3 new starters, each with a different resume.  Shields is an ace, all-star, potential Cy Young candidate, etc.  Santana is veteran with a mixed history – he has looked great and the baffling in consecutive starts.  Davis is still younger but couldn’t break through with the Rays, who are very deep in pitching.  Can Shields anchor a Royals staff the way Zack Greinke did and win a Cy Young?  I don’t think he can.  Don’t get me wrong, he is great.  But he doesn’t line up with the other big time aces in the game.  And the Royals gave up a prospect to get one of those, not someone in the second tier.  Royals fans will admire the guts of taking a shot, but they will regret trading Myers for what might get them second place in the AL central and no post season.

The Royals will come up short.  In a perfect world, they would have waited a year, replaced Jeff Franceour with Wil Myers and tried to get a value in FA pitching and make a run in 2014/2015.  Their lineup is still young, but it’s not good enough to out hit opponents and their pitching isn’t good enough to shut opponents down, especially int he AL.  But hey, we wish them luck.