I feel like this year’s preview could be copied almost straight from last year with a few name changes.  The Angels went out and signed a big stud hitter for big bucks.  This year – Josh Hamilton, last year – Albert Pujols.  They changed up their pitching staff.  This year – Tommy Hanson and Jason Vargas, last year – CJ Wilson.  So what did it get them last year?  Jack shit.  3rd place in a pretty good division – even though they were playing much better towards the end of the season.  One thing they do have this year, that they didn’t last year: a full season of Mike Trout.

Let’s take a closer look at the Angels.

The Angles certainly weren’t quiet this off season and pulled another sneak attack when they signed Josh hamilton from rival Texas.  It was seemingly likely the Mariners or Rangers for Hamilton and then the Angels swooped it and gave him exactly what he wanted.  When Arte Moreno sees a shiny toy he wants, he steps up big. They also need to reload their rotation after Zach Greinke left and they jettisoned Ervin Santana.  They grabbed 3 new starting pitchers so they at least got some bodies in there.

The first name on this lineup is the most important.  Mike Trout maybe be the best player in baseball when you consider all aspects of the game.  And he is still 5 years away from his “peak” season.  Trout sets the table for what is a ridiculous lineup.  Their 3-5 hitters could easily combine for more than 140 HRs this year.  I wouldn’t be surprised if Hamilton saw sometime in the 2 hole because he’d get a steady diet of fastballs of Pujols, but I don’t think it will be the norm.  The angels will also probably have the best defensive outfield in the majors.  Peter Bourjos is a way above average CF and he is playing RF.  The story last year was the “new” lineup needed time.  I don’t believe that, but it better not be an excuse this year. 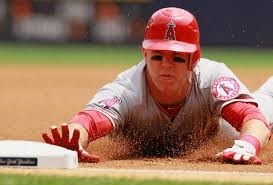 Jered Weaver is the horse here.  He has been great as an Angel and they will count on him to anchor the rotation.  CJ Wilson regressed a bit afte cashing in last off season, but he is a talented pitcher.  This staff will be greatly affected by how well he pitches.  Do we get 2011 CJ or 2012?  The next three are the reloaded part of the rotation.  Hanson has talent but his arm is spaghetti and I don’t know if he’ll ever be the same.  The next two are innings eaters and shouldn’t be expected to shine, but with this lineup a 4.5o ERA should be good enough for the 4/5 starter.  I know the Angels signed Ryan Madson, but he’s coming off a season out of baseball and Fieri pitched so well last year.  I think he gets the nod.

Anything outside of winning the AL west will be a disappoint.  They stocked up this year, while their biggest competition, the Rangers, stood pat.  Last year I predicted the would win the World Series.  This year?  Not sure yet, but I don’t think the other teams in the division have kept up the talent fo the Angels and it will show in their final records.  Oh…and enjoy enjoy watching the best player in baseball run around your field for the next 5 years. (At least)