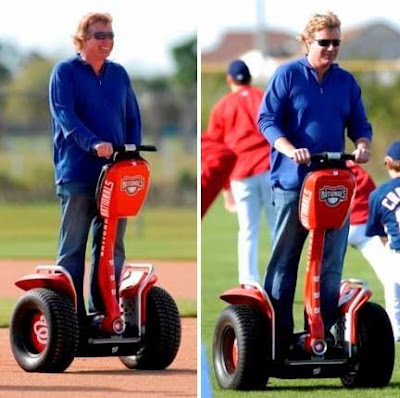 (*Some would argue this is where the franchise player goes. The Nationals do not have a franchise player(s), just a GM on a fucking segway scooter. Jim Bowden, you have the conch.)
Leading up to the start of the 2008 Regular Season, Diamond Hoggers will preview each of MLB’s 32 teams. Teams will be rated on a 10-point scale in the following 5 areas: Lineup, Pitching, Manager, Intangibles/Chemistry, and Overall. Today’s team is the Washington Nationals.
Diamond Hogger’s Nationals blog of choice: The Nationals Enquirer
Lineup
This group has a ways to go to be impressive. They also play in Yosemite, so it won’t enhance the numbers of this group of fringe players. Felipe Lopez will lead off at shortstop. Christian Guzman and Ryan Zimmerman will follow. I guess if the Nationals had to pick a franchise player, Zimmerman would be it, although he wouldn’t be in the top 3 on many teams. He’s a scrappy young player and I like him.

Nick Johnson (1st base) will hit clean-up, with Austin Kearns protecting him in the 5-hole. Austin Kearns. This guy deserves his own post on the site. He once gave my ex-girlfriend a perfectly signed baseball (on the sweet spot) on her b-day. During his time in Cincinnati, I told everyone I knew that would listen that we were watching the next superstar of the game in Austin Kearns. He was my boy. He had an unreal 2003 start to the season, and then Ray King fell on him at home plate and he hasn’t been the same since.

Reclamation projects. That is the theme with the aboved pictured GM Bowden. It is his obsession. He recycles old arms and guys who haven’t panned out and thinks that his bringing of them to the mix will help them culminate everything beautifully into a career year. Usually these players have at least appeared in some games with the Cincinnati Reds during Bowden’s tenure there. Brett Boone is in camp people. Brett Boone.
That brings us to our next contestant, left fielder Wily Mo Pena. Once again, he’s not that old. The ‘younger Sammy Sosa’ might be able to have a big year, but if he does it will surprise 98% of those who follow the game. The center-fielder is Lastings Milledge. He might have the most talent of anyone in the lineup, and that’s just because he hasn’t had time to blow it yet. Rounding out the lineup is the embarrasement that is Paulie Lo Duca. Mr. Gameface himself. He’ll most likely begin the season hitting 8th as the backstop. Please don’t sleep on Ronnie Belliard or Dmitri Young, who add to the interesting mix.
The rating speaks for itself.
Rating: 6.3
Pitching
If you’re expecting to get some sympathy here, I can’t do it. I’m calling it like I see it. This is an absolutely pitiful rotation. Shawn Hill is the #1. When you trot Shawn Hill out there every 5th day to stop streaks, you’re in deep shit. From there, John Patterson, Jason Bergman, John Lannan, and Matty Chico (not hispanic) round out the five starters. Chico is the only guy I know much about after Hill, and I just know enough to know he might be the worst left handed starter in the National League. He’s God awful. Matty Chico, if you ever read this, I’m sorry man. You’re young and a Major Leaguer. Enjoy it while it lasts. Carpe Diem!
The player I like the most on this roster most likely won’t be here come August should the Nats fall out of the race. Chad Cordero is the closer, and he was an All-star just two short seasons ago. I’m partial to him because he was on my fantasy team, and although I know he’s Dominican, he looks like he could be Pisan.
The set-up guy is eventual closer John Rauch. He’s big and nasty looking and he’s got great stuff. Luis Ayala and fireballer Jesus Colome (back to the untapped potential stuff) are other relievers of note.
This isn’t a group that is going to open up shop on the Braves and Mets very often, but they’re better than that lineup.
Rating: 7.0
Manager
There’s not an abundance of informaton out there on Manny Acta. He went 73-89 in his first year as a big league manager. He was in a tough division also. He is a throw-away that the DiamondBacks and Dodgers did not want. The jury is out on Acta, and I’d look like a real ass if I declared that he wasn’t going to amount to much and then he went on to win manager of the year or 90 games. I’m pretty sure that won’t happen; but I’m also wise enough to know that Clint Hurdle is a pretty good big league manager that started out with a few rough seasons. Acta could turn out that way. He’s not there yet.
Rating: 6.1
Intangibles/Chemistry
This is where this section of the previews really gets fun. I’ve said before that chemistry either really helps a squad and you hear about it when a team is winning and winning or it destroys a team; there is no in between. It’s more likely to be something that hurts this bunch.
I’m not lying when I say this: this could be the most interesting roster make-up in the history of baseball. Credit that to the man pictured above on the fuckin’ scooter.
Bowden opened his arms in the offseason to the many cast-aways of MLB. He said: “Give me your accused, your washed-up. Give me your has-beens and never will be’s. Give me your retreads and your prospects. Your expressives and your laid-back personalities. We welcome them all to Washington.” And then Noah Bowden g
ot on the Arc (scooter) and set sail for RFK stadium.
This is a hodgepodge group, and there is little or no chemistry with many of the additions being here on 1-year deals.
Rating: 6.0
Overall
This team has got the chance to really make me look like an idiot because I’m going to go out on a limb and say they’ve got the capabilities to lose 100 ballgames and rival the San Francisco Giants as the worst team in baseball. They’re better than the Giants, but they’ll rival them.
I think it’s going to be a fun season in the nation’s capital, but it’s going to be because Elijah Dukes tried to go all Pedro Gurerro on a fan or Paul Lo Duca gets bit by Wily Mo’s pit-bull. It’s a zany cast of characters and it would honestly be good for baseball if they compete this season, but they will not.
Rating: 6.4