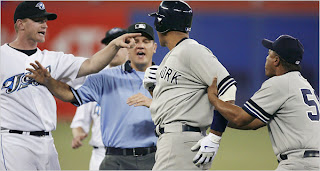 The benches cleared twice, and when the game was over Roger Clemens was ejected after throwing 6 shutout innings and picking up his 4th victory of the season. On Clemens’ 90th pitch of the ballgame, he resorted to retaliation to plunk Alex Rios in the back with a 92 mph fastball.

The Yankees won their 5th game in a row, paced on offense by Bobby Abreu’s 4 RBI, and Jorge Posada’s 3 hits, along with the efforts of Clemens. The Yankees are now just 5 games out of the AL East lead behind Boston, and are 63-50 on the season.

Related Items
← Previous Story We must note A-Rod's impressive, but regular season
Next Story → Always interesting in the Bronx