Draft Day for the Diamond Hoggers

The big day has arrived. As I write this little entry, I’ve got in a giant hogger, and I’m thinking over my picks. I haven’t studied up for my draft nearly enough, and I expect more than usual improvisation on my part tonight. You just kind of see what is left on the board and draft by need. Some things will change because this is known as a keeper league. Keeper is defined as a term used to refer to the status of a person that one is dating being worth marrying. Well it’s kind of like that in fantasy baseball. Three of these guys, I’ll be married to for the next couple fantasy baseball seasons. It is essential that I get the guys I truly want.

Now while I’d love to divulge some of my sleepers and the guys I’ll be grabbing in the early going, I can’t do that. I don’t want George to swoop in like a hawk and snatch anyone out from under my nose. They’re mine. When it comes to fantasy baseball, I’m a greedy prick. I will say this, it’s not too hard to figure out who my ‘must haves’ are.

Like it or not, our readers will probably be hearing a lot more then they’d like about our fantasy squads. As I told young George, the Fantasy Baseball Draft is a time honored tradition. A fantasy baseball championship is a great honor, one by the few, the proud, and the lucky. It signifies class in the highest levels. Men who win Fantasy Baseball League Championships go on to do incredible things in life. They’re more successful people. If you can manage a fantasy baseball team with the variable personalities on it, you can successfully run a business, a fortune 500 company, or perhaps a Dairy Queen.

I’m more interested in finding the sleeper than I am our country hunting down the Al-Queda. I’ve been in this game since 1999, spending long summer days in between my whack-off sessions making changes to my fantasy lineup, having that ‘gut’ feeling that represents a guy about to go 4 for 4 or knowing that Dave Burba is going to give you a quality start so you pick him up off the waiver wire and throw his burly ass in there.

I cannot help but think of the men that were valuable contributions to my fantasy baseball success. I think of the men that came in and helped me win my one and only Fantasy Baseball Championship back in 2002. I think of the men of the future that will help me build the dynasties that withstand the tests of time on my ESPN profile. I think back to fallen heroes that failed to bring me long awaited glory. I also think back over the years to the good memories of certain Major Leaguers that held that special honor in our leagues. The guys who myself and other members took turns on, double and triple teaming, passing around like a little slut, one after another. These players became known as ‘Fantasy League Whores’. Turn one trick and when you’re done and all used up, get released and picked up only to be used like the little slut whore you are again, you cum dumpster. 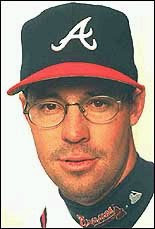 The Biggest Fantasy League Whore of them all, Mad Dog.

So hang on, enjoy the ride, and expect some great material from the draft tonight, and more of the same outstanding Diamond Hoggers coverage that makes us the most intriguing baseball blog on the internet. Stick around, because you just might learn something. Like how to waste precious moments of your life pretending you’re a big league manager, and doing unimportant shit like editing your lineup and then writing on a blog about it. Pretty soon, your life is reduced to shit, you’re homeless. No one likes you and money is tight. But none of that matters because you were tops in your league in saves. That’s what dreams are made of, in fantasy baseball.