Home / Uncategorized / So that's what taught Gary Mathews to hit….

So that's what taught Gary Mathews to hit….

You’re not fooling us anymore


The latest word is out about a player in Major League Baseball. A story broke today in which Gary Matthews Jr. was named as the latest big leaguer to possibly be linked to steroids, this time a mini-BALCO plant in florida is the institute busted.

We took a look at Matthews Jr.’s stats, and there are some things that have us concerned. Basically at the age of 32, no longer the prime of a ballplayer’s career, Matthews had a career year. His slugging % was nearly .500 and this came after basically 7 seasons in the big leagues. Matthews had a career high batting average (.319) and far surpassed his career high in extra base hits (69).

We think this could be due to more than just having a hitting coach that he found continuity with and knowing it was time to come through before a free agent year. Actually, it could have been those things, as well as mixing a few HGH and Deca-cocktails. In short, if it smells like shit, and looks like shit, well then Chucko, it probably isn’t mud. 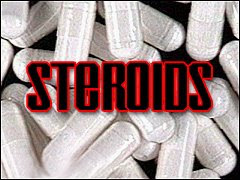 Related Items
← Previous Story "The Mesa"
Next Story → The Start of a Championship?