For the 2014 Detroit Tigers Team Preview, we enlisted the services of one of the most devoted baseball fans we know; a huge Tigers fan named Corey. We also know him as ‘Detroit Stars’, one of the most feared Fantasy Baseball managers on the planet. You can follow him on twitter here.

I thought the 2013 Tigers were about to go up 2-0 against the Red Sox in the ALCS.  I thought Game 2 was over they’d take it back to Detroit to clinch the pennant.  I thought Detroit was heading back to the World Series to win their first championship since 1984.  Then David Ortiz put a first pitch 86 mph splitter from Joaquin Benoit over the outstretched glove of Torii Hunter and this iconic image was born. 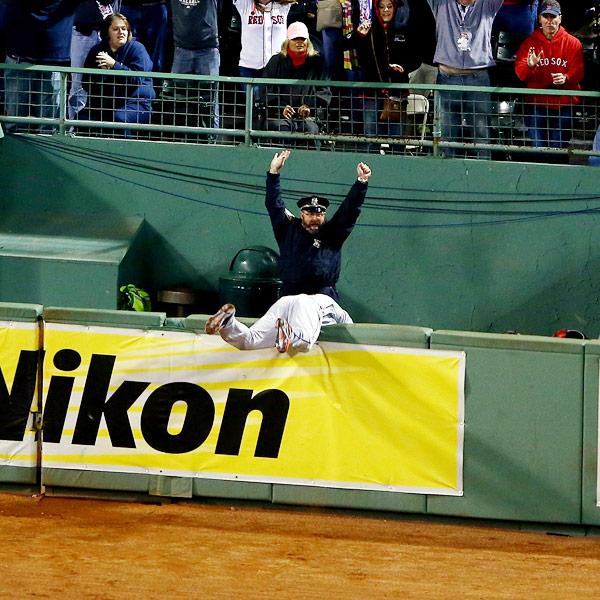 Almost immediately after this grand slam tied up the game in the 8th inning I knew the season was over.  You could just tell the Red Sox were going to feed off this moment and take control of the series.  I blame it on the fact I was already talking 2-0 with a chance to win the series in Detroit of course, but I’m superstitious like that.  I really liked this Tigers team but their bullpen let them down one too many times and Koji Uehara was lights out.  Anyways, Boston closed the curtain on Detroit in Game 6 and here I am wondering if I will ever see a Tigers World Series championship (they last won the year before I was born, I am the curse).

Enough dwelling on the past though, here is a look ahead at the 2014 Tigers club. Click through the jump for your full Tigers fix.

Overall, a lot of change this offseason for the Tigers.  How they take to the management of Brad Ausmus and losing Prince in the cleanup spot are some key things to watch.  The first thing everyone loves to see is what type of tinkering Ausmus might do with the lineup.  Here is how things are shaping up from what we’ve seen so far in Spring.

It looks like Kinsler will get the first look as the new leadoff hitter with Jackson moving down in the order.  I don’t mind this but wouldn’t be surprised to see Jackson at the top again with Kinsler in the two hole and Hunter batting fifth.  Kinsler probably isn’t going to go 20-20 anymore but a 15-15 year can be in reach and I’ll take that from him if he’s getting on base.  Personally, I’d like to see Davis leading off against lefties with his speed and .354 career OBP against LHP. 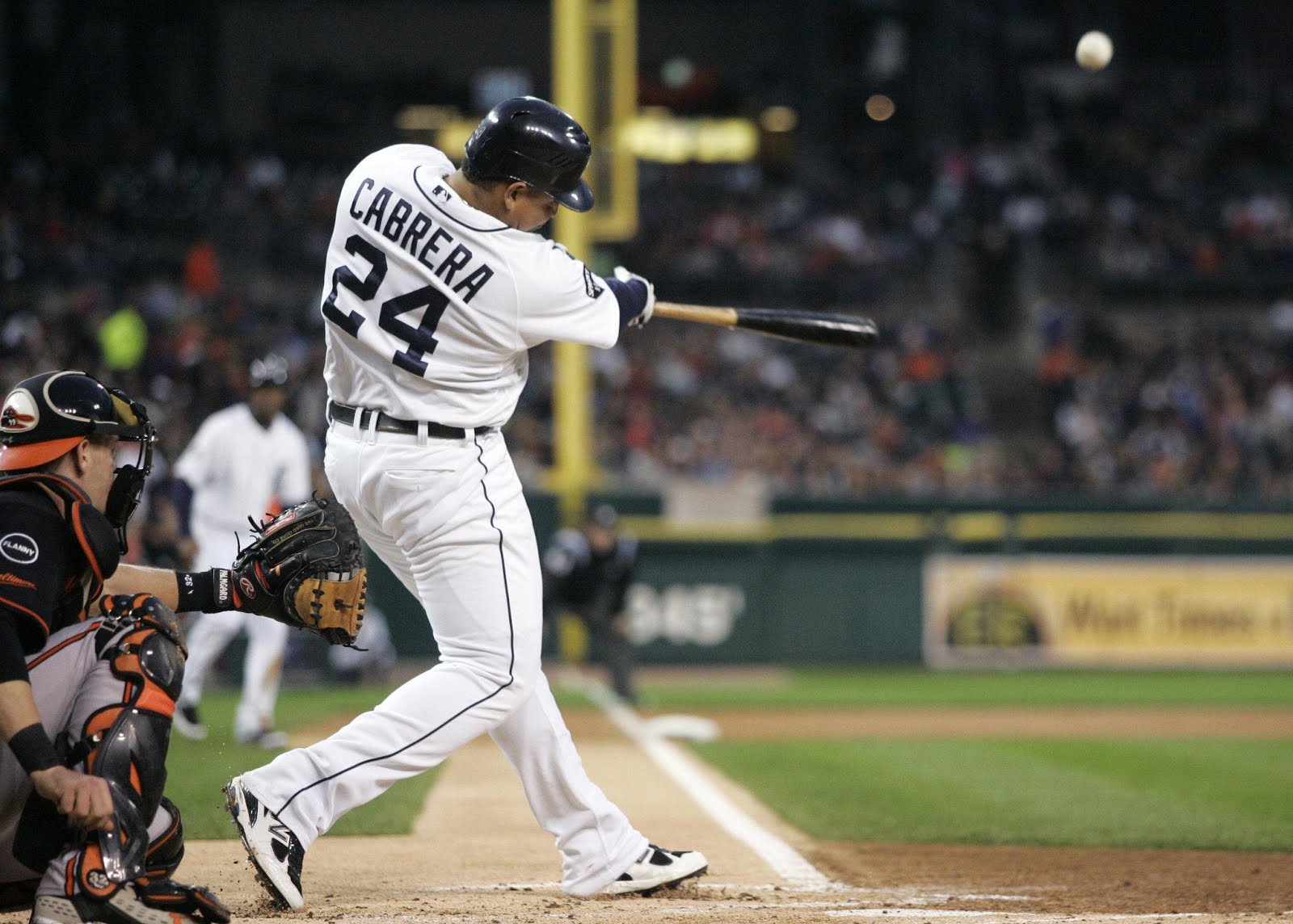 I think Ausmus will smile every day when he gets to pencil Miggy into that three spot (I know I do with my fantasy lineup every morning).  Cabrera is the nucleus of this lineup and I see him competing for another Triple Crown regardless of who is hitting behind him.  The guy seems to get better every year and we should all feel privileged that we get to watch him hit on a nightly basis.  Miggy gets to slide back over to first base too which is probably where he belongs.  Victor Martinez will take over Fielder’s job of protecting Cabrera.  Victor isn’t going to hit 30 home runs but the guy hits and drives in runs.  You can pencil him for a .300 average and I’m fine with that when you’re talking about a guy who will be up with runners on base a lot.

The bottom half of the lineup does have a some concerns.  Alex Avila enters his age-27 season as a bit of a disappointment the last few seasons.  He’s been terribly inconsistent and gets beat up behind the dish causing him to miss games a couple times a year.  I’m pretty sure he has as many concussions as home runs since 2011.  There isn’t much backing him up either so the Tigers need him to stay healthy.

With Dirks/Davis and Iglesias hitting at the bottom of the lineup, there isn’t a lot of offensive promise.  As mentioned earlier, Dirks will undergo back surgery and miss up to 12 weeks.  Rajai Davis will hopefully take advantage of the opportunity and at least give the Tigers a major threat on the base paths.  Don Kelly, who just always seems to find a way on to this club, will also probably get a boost in playing time the first two months.  More on Iglesias and what he brings to the table.  Although he might not set the world on fire with the bat, he is a joy to watch in the field.  Omar Vizquel is now signed on as an infield coach and the thought of him and Iglesias together is somewhat of a match-made in Heaven.

Check out the video below for an arousing display of defense:

With the trade of Prince Fielder and Cabrera moving back to first base, the time is now for Nick Castellanos.  The lone Tiger player in most top 100 prospect lists, Nick will get a chance to prove he belongs in the lineup everyday.  Most people will agree that he has the bat to make it in this league and I’ve liked the way he’s been swinging the sticks early on in Spring.  If Castellanos can give them some stable production in the six hole, it could be just what the Tigers need to balance out the lineup. I’m hoping for a .265 15 HR type of season for him in his full rookie year.

My biggest concern with this 2014 team is the lack of depth.  Don Kelly is basically the best guy off the bench and that isn’t something you want to brag about.  With Dirks already out for at least two months, this depth will get an early test.  The Tigers scored the second most runs in the Majors last season and while I expect that number of 796 to go down a little, they should still be considered a top tier offensive team.

The Tigers became just the third team in baseball history yield three 200 strikeout pitchers in one season.  They are lucky to be able to run out a trio of Verlander, Scherzer and Sanchez on a given weekend.  This portion of the rotation is one of the best in baseball and gives them a great chance of winning any playoff series.  Doug Fister was a great piece to have in the fourth spot but Detroit decided to move him and give their young lefty Drew Smyly a shot in the rotation.  Smyly put together a nice year in the bullpen last season (2.37 ERA in 76 inn.) and I like his chances of being a sub 4.00 ERA guy this year which is a great thing from your number five guy.

I think Rick Porcello is the key to this rotation.  I think it’s his time to make the step up to a solid MLB starter.  We know he isn’t going to join the 200 K club like the guys ahead of him but he’s got a nice mix of pitches and maybe at age 25 things will start to fall his way.  He induces a ton of ground balls so he is the one that could benefit most from an improved infield defense.

Joe Nathan will be handling ninth inning duties in the Motor City and I haven’t been more comfortable with a Tigers closer in possibly my entire life.  Todd Jones, Fernando Rodney and Jose Valverde should have all come out of the bullpen with a health warning attached to them.  I’m excited about Bruce Rondon because he throws 103 and and his change comes in at a speed that Jamie Moyer’s fastball is extremely jealous of.  If he can come in with some command, he could churn out some good late inning numbers.   Joba Chamberlain, Al Alburquerque, Phil Coke (sigh) and Ian Krol will be the other guys blowing leads headlining bullpen duties.

The Tigers have a top tier trio of starting pitchers and one of the better closer’s of the past decade.  After that there are some question marks.  Can Porcello and Smyly hold down the back end of the rotation?  Can one or two guys step up to provide consistent 7th-8th inning roles?  That could be the difference between a 95 or 85 win season in the AL Central.

I like what Terry Francona is doing in Cleveland but outside of the Indians, I don’t see much of a threat to the Tigers taking home their fourth straight division title.  I do expect one of those battles with Cleveland that goes down to the last weekend of the year again.

The Tigers have a core of players that provides them with a great chance to get back to the World Series.  With any luck they will be right in the thick of things in October again.   With a minor league system that ranks near the bottom five, they need to try to get it done with this Cabrera led team and give up whatever they have left on the farm to get a piece necessary to win now when the trade deadline rolls around.

Regardless of what the 2014 Detroit Tigers team has in store for us, I’m just looking forward to watching them every night.  Cabrera, Castellanos, Verlander and Scherzer have me excited for what’s to come.  I’ve taken off Opening Day and will be sitting on my couch, hot dog in hand, as they take the field at 1:05 est at Comerica Park.