Alright so the first thing we were looking forward to at Redsfest was the memoribilia. We saw that on the map there was a Topps sponsored stand and a bunch of other memoribilia dealers set up. As a kid, we were intrigued by this type of stuff. We bought stuff all day long, baseball knick-nacks and just piled it up. Cards, figures, autographed shit. We couldn’t get enough of it. And why? There’s not much you can do with stuff you ‘collect’ after you buy it. We still don’t have a good answer for that, but it’s just fun to have stuff like that. After paying a visit to Redsfest and seeing all they had to offer in the way of cards and collectibles, we can safely say that we haven’t come close to growing out of that stage. 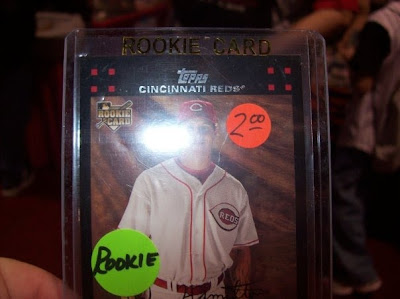 Of course if you have your girlfriend with you, it’s like pulling teeth to get any woman through a bunch of baseball card stands/memoribilia. So….. you send them looking for a Christmas ornament for the tree and then by the time she finds you again you have a Josh Hamilton rookie card waiting for her. She was disappointed that Josh Hamilton wasn’t there in the flesh, as she’s got a major crush on him. Hell, we had a crush on him. Once on the subject we started salivating thinking about a lineup including Jay Bruce, Hamilton, and Adam Dunn…. arrrrggghhhhhhh.

Speaking of our boy Bruce.

The one thing we wanted to get (we wanted a lot of things) but we had to come away with a Jay Bruce rookie card. We were successful in that. We also got a card of Bruce commemorating his 3 for 3 debut made by Upper Deck. We also picked up a couple of Homer Bailey rookie cards. We’re way past the point of convincing ourselves that baseball cards could be an investment. We just like having them until we lose them. We wanted to add Bailey to the kitty.
All in all there were cards of any player in Reds past or present. There were photos. There were bobbleheads. Autographed baseballs were everywhere. It’s a bad time to spring for memoribilia and it’s an even worse time to be selling it. If we were rich we would have walked out of there with bags full of this shit. We even saw a Ken Caminiti/Craig Biggio signed ball from their heyday. Kind of eerie, kind of cool.

Had to get a picture of those badboys. You own one bobblehead, you own them all. Mo Egger of 1530 Homer was nice enough to send us a Bruce bobblehead last summer out of the kindness of his heart, so we didn’t need to waste any money on this item. Yes, that is Tom Browning on the far left.

Eric Davis autographed ticket stubs. We loved Eric the Red as a kid. Who didn’t right? These caught our eye.
There was also free baseball card stands featuring nearly every member of the current Reds team. The cards were made by Topps and have a special ‘Redsfest’ stamp on them. We grabbed Scott Rolen, Johnny Cueto, Jay Bruce (5), Ryan Hanigan, and Joey Votto that we can remember.
If you’ve got the money, and you have the time to look around Redsfest, you’ll find some really cool and unique collectible items. Basically anything you can name or dream up, they have someone there selling it.