Redsfest 2009 was an absolute blast. You know, we were trying to report. It was right up our alley from the entrance of things:

It’s obvious that the organization from a strategy standpoint try to treat Redsfest like a weekend long pep-rally. In essence, it’s to make you forget about the decade + of suckdome we’ve endured and get you excited about the 2010 season before it has a chance to get here and we jump out to a 5-13 start!

There’s an emphasis on the Bruce’s, the Votto’s, the Phillips’, the Cueto’s and Frazier’s. The young stars on this team is the standpoint the organization is taking to get you excited. I like it a lot more then rooting full of a team of aging stars. It should be mentioned that Homer Bailey was not in attendance, which is kind of a bummer. No reason stated by anyone, but it would be nice to have your young ace-to-be in attendance when we’re trying to get pumped up from an organization standpoint.

One of the best features we took in was the Q&A panel from Joey Votto, Danny Ray Herrera, Adam Rosales, and Arthur Rhodes. A bunch of kids lined up and asked these guys cool questions. It was neat getting to hear them talk about why they got involved with baseball, their favorite music and their favorite television shows. When it was finished I got to shake Arthur Rhodes’ hand and wish him good luck for the season, as well as Herrera.

And there he is, there he is, there he is! That little bald-headed General Manager of ours Walt Jocketty. I’d have loved to have had a word with him. I was asked if I thought he was a good GM. You know what, I think he is a good GM. All in all, we’re pretty lucky to have him. A lot of the moves that aren’t made aren’t his fault. He does the best with what he has to work with. He isn’t a guy who is going to trade away the future I don’t think. He won’t make a move to hurt you. I’m a lot happier with him in place than Wayne Krivsky; it simply just wasn’t an overnight fix here in Cincinnati. It’s still not going to be. If he’s given the time and a decent payroll to work with, he’ll build a solid contending team I believe. I think that a lot of times even myself view Jocketty as the bad guy because he is the bearer of bad news i.e. “the payroll will remain the same” but it’s important to remember that if it was up to him he’d probably spend big. It’s not his money.

This was another fan attraction at Redsfest. They had a couple speed pitch stations set up and I dusted off the ol’ throwing arm and hit 61 MPH on the gun. I swear those guns are broke. As I told the GF, if one of those big leaguers got up there and threw on that gun it would only hit 75, tops. Those guns are pure shit, and they’re at least 10-15 MPH off.

Pictured above is the batting cage, where you could take your cuts with old beat up bats. My feeling is, there’s so much cool stuff to do at a place like Redsfest, why do you wanna hit in the batting cage? Seems like it was put there as a diversion to cut down on the number of people interested in the cool shit. It’s like going to a baseball game and hanging out at the kidszone playground for a few innings. 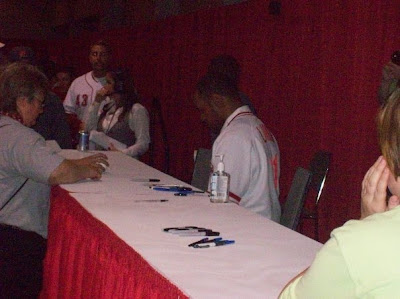 The star of the 1990 Reds, and my first favorite Cincinnati ballplayer Barry Larkin. I guess he signed for the better part of two hours. I got to meet Barry and shake his hand at the original Redsfest I attended in 1996 or so. I still remember his play in the 1990 playoffs like it was yesterday, constantly on base and scoring runs. The guy is a legend in my mind. I don’t know if he’s a Hall of Famer or not, but he was a special player and a superstar. That isn’t a word I like to toss around. 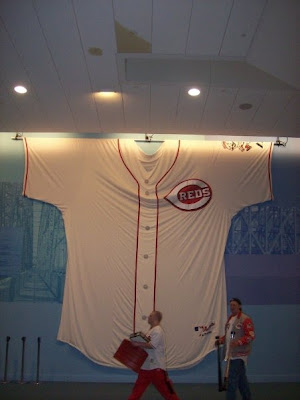 MLB Network had a stand set up. We’re HUGE fans of MLB network and screw Insight Communications for not offering it! There was a feature where you are sat down and interviewed by Harold Reynolds as to why you are baseball’s biggest fan. The interview was supposed to be emailed you you. We never got the e-mail but we told Harold that we’re baseball’s biggest fan because we bring Diamond Hoggers to you fine folks every single day! That isn’t an easy job.

In case you haven’t heard, the Reds spring training is moving to Goodyear, Arizona this season. There wasn’t a lot of features about the Spring Training site but we did manage to catch this image of it above. 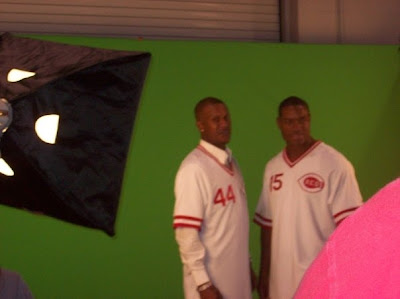 This is the closest we have ever been to Eric Davis or our facebook friend Glenn Braggs. It was cool that Braggs made the trip to Redsfest all the way from California. Braggs looks like he is a lifelong body builder, no shit. He is absolutely jacked, one of the biggest 40-something year old dudes I’ve ever seen. 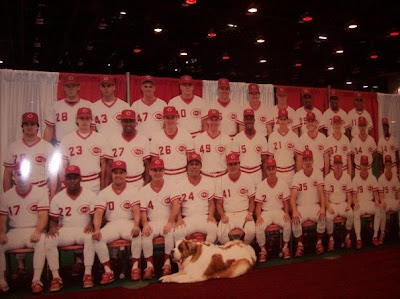 Here’s just a shot of those lovable early 90’s Reds. And out in front, Schottzie. Those poor guys had to have their team photo ruined by a damn dog. 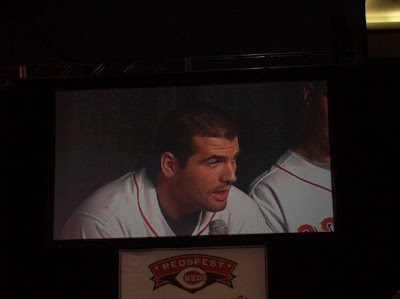 Joey Votto talking on the big screen during the panel.

There was a Chiquita Banana stand set up. A lot of people don’t know that the owner of the Reds also owns a very large produce company and some of Chiquita Banana (or they’re business partners or some shit). Just a random photo thrown in to this whole bit.

Bunny Arroyo ladies and gentleman. The mid 20’s women were lined up to get their photo with this dude. You have to imagine ol’ Bunny slapped a few on the ass or slipped the digits to them ala Big Ern Mccracken on their way past.