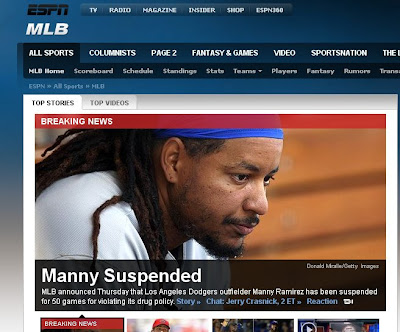 Pretty huge news breaking this morning out of Los Angeles. Star outfielder Manny Ramirez has been suspended 50 games by baseball for testing positive for a banned substance.

Manny had this to say:

“Recently I saw a physician for a personal health issue. He gave me a medication, not a steroid, which he thought was OK to give me,” Ramirez said. “Unfortunately, the medication was banned under our drug policy. Under the policy that mistake is now my responsibility. I have been advised not to say anything more for now.

“I do want to say one other thing; I’ve taken and passed about 15 drug tests over the past five seasons. I want to apologize to [Dodgers owner Frank] McCourt, Mrs. McCourt, [manager Joe] Torre, my teammates, the Dodger organization, and to the Dodger fans. LA is a special place to me and I know everybody is disappointed. So am I. I’m sorry about this whole situation.”

The anonymous source positive-test result is expected to be announced later today. It is interesting because Ramirez made it very clear that it wasn’t a steroid. Something that also needs pointed out is that Jose Canseco (even being the asshole he is) mentioned months ago that he wouldn’t be surprised if Manny Ramirez was guilty of using PED’s. He’s been right on everyone else hasn’t he?

Something that everyone must realize in this situation is that you shouldn’t expect to ever know the whole truth unless you are on the inside or know someone on the inside. Millions and possibly billions of dollars of future revenue are being protected when dealing with a mega superstar of a pro sport and a sensitive issue like a performance enhancing drugs scandal. They’re going to come up with a crafty way of spinning it so Manny can appear as little in the guilt as possible. The bottom line and take home message here is that another legend and future sure fire Hall of Famer has been fingered and will now be forever tainted in some way. When you are as good as Manny and have been that consistent for that long, it just doesn’t look good in the mind of others to have this black eye on your body of work.

Some outlets like Deadspin are already calling it a positive test for steroids. So that adds to an already interesting situation in what is sure to be one of the biggest stories all season long.

Ramirez was already a hitter who could do it all, and unless he has been using steroids or PED’s since 1995 or 1994 when he broke into the league; which is highly unlikely; it doesn’t seem like he would have needed any type of push to get him over the edge and make him a star. The guy could always hit for average, hit for power, and make adjustments at bat to at bat as good as anyone in the game. That’s what we’ll always remember about Manny as an Indian was his ability to get the big hits time and time again and maybe look fooled on one pitch but then able to hit a bomb off the same pitch the very next delivery.

We like Manny. We hope for the good of the sport that he somehow isn’t the next in line labeled a doper. Right now there’s a lot of uncertainty and it couldn’t come at a worse time for the Dodgers really. They just won their 13th straight home game to open the season last night, setting a Major League record. They were beginning to look unstoppable. This will force them to show that they’re more then just a team built around a superstar.