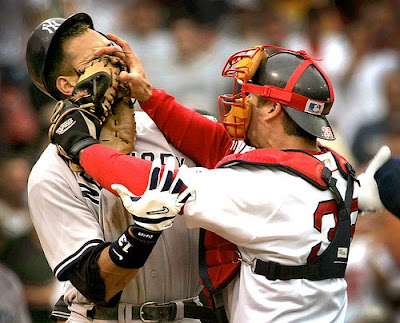 We’ve reached this moment again. The Yankees and Red Sox continue the most storied rivalry in baseball history this weekend at Fenway park. These two teams are each playing good baseball, which makes this series even more appealing even if it is only April.

The Red Sox are coming off of a sweep of the Minnesota Twins. The Yankees had a big 14 inning win yesterday with a walk-off home run at their new park by Melky Cabrera; the first of that variety in their new home.
Joba Chamberlain and Jon Lester open up the series tomorrow evening. Saturday’s 4:10 PM tilt features Josh Beckett and A.J. Burnett, in a game that could easily see these two starting pitchers amass 20 strikeouts. Andy Pettite and Justin Masterson wrap up the series on sunday night baseball.
This is an important series in that if one team sweeps the other, then you obviously will see some continued momentum from one side that would have one thinking that team has the upper hand in the division. No, we aren’t taking the Blue Jays good open season run seriously just yet. We still feel that one of these two teams will end up taking the division and this series will provide us with an excellent idea of who has the edge early on.

We don’t have to work too hard at coverage for this series, ESPN will do that for us. But keep an eye on it as it could provide us as baseball fans with some great early season drama.