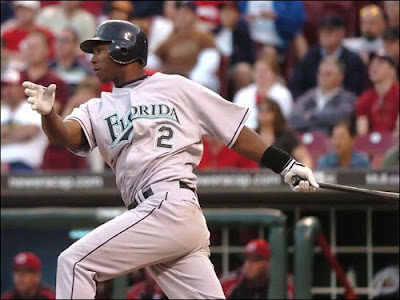 Every few years the upstart Florida Marlins make an improbable run to the World Series after being left for dead by their fans, their owner, and the rest of the world. Talent wins out over all of those things, and the Marlins win that World Series and then shortly thereafter trade away that young star talent that got them the rings and start over again by finding more young talent with their superscouts in the minor leagues. Rinse. Wash. Repeat.

We’re back at that window where the Marlins can start thinking about making a run again. They’ve stockpiled the young talent and they’re headlined by one of the biggest stud players in all of baseball, shortstop Hanley Ramirez. Every baseball fan should have a chance to see this kid play to be able to say they’ve done it. When it’s all said and done, they’re going to be electing him into Cooperstown because of the things he can do. There are few players in the game today who based on talent alone are sure fire future Hall of Famers. We’re comfortable with saying Ramirez is that kind of player.

Cue the young talent. Cameron Maybin is said to be a young Ken Griffey Jr. clone, and he’ll be leading off and in centerfield. Did you know that his first career hit was a homerun off Roger Clemens? He’s going to look like a rookie at times but he’ll show some superstar qualities in the same breath. He reminds us of a third long lost Upton brother in a lot of ways.

From there, Jeremy Hermida will be in right field. Good power, and hitting in front of Ramirez won’t hurt his numbers. Hermida should be ready to have his best year ever. Ramirez sandwiches Hermida and Dan Uggla, who is a gem in the rough. Uggla has 35 homer power and should be a lock for 100 RBI this year, which are tremendous numbers for a second baseman. From there you have Cody Ross, a nice player in Jorge Cantu, catcher John Baker and first baseman Gaby Sanchez.

The bench is comprised of some nice names as well. Dallas Mcpherson was a highly touted prospect. Wes Helms can hit with some pop off the bench. Alfredo Amezaga and Mike Rabelo will get some active duty as spot starters and Luis Gonzalez is the token veteran making what is probably his last stop in Miami.

People aren’t that high on their rotation generally, but they never pitch as badly as expected. They always seem to get that performance from a guy who has been pegged as a recycled arm, dating back to the Charlie Hough days. A lot of the disinterest in the starting rotation comes from the fact the ace is Ricky Nolasco. He is nothing spectacular. His arm is not electric. He just collects outs and is good at it. Josh Johnson returns from an injury riddled season where in 2007 he was making a push to become one of the finer young arms in the game. Anibal Sanchez has struggled with his own injury problems and will be the third starter. Andrew Miller and Chris Volstad are flamethrowers in the 4 and 5 spots, and expect one these highly regarded youngsters to emerge as a frontline starter by the end of 2009.

The bullpen has a bunch of relative unknowns. The closer is Matt Lindstrom, he’ll be set-up by newcomers Leo Nunez and Scott Proctor. Everyone knows who Scott Proctor is. Kensing, Pinto, and Tankersley are all younger guys who’ve have had control problems in their MLB careers. Overall the pen is a patchwork mess that isn’t going to be a strength at any point. The pitching staff is nothing to write home about and could hold back a tremendous group of young hitters.

This team isn’t going to win it all this year, but they’re going to be in the mix in one of the better divisions in baseball. They’re going to be very tough to beat when they get hot and their energy level and hunger should be easy to see on most nights, something you won’t see from a veteran team. They’re a ways away, but don’t doubt yourself that in a short time this team will make an almost overnight run to the top once again. The question is how soon can it be?