Home / offseason / How can we create a Super Bowl-like buzz for the World Series?

How can we create a Super Bowl-like buzz for the World Series? 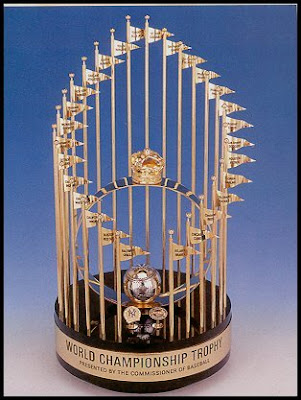 This weekend you’ll gather with many of your friends to watch the Super Bowl on what is known as “Black Sunday”. Chances are you probably aren’t fans of either the Pittsburgh Steelers or the Arizona Cardinals. But its still the highlight of your weekend. It’s just American to gather and watch the game amongst friends. You’ll eat fattening foods, you’ll maybe consume some alcoholic beverages. It’s all deemed okay because its Super Bowl Sunday.

We love NFL football. Obviously Major League Baseball is our favorite sport. Our first love. While wanting the same thing for our favorite sport, we try to stimulate thoughts on how we could make it a reality.

Jayson Stark of ESPN has some ideas:

-Make it a cultural event, not just a sporting event
-Turn Game 1 into the biggest baseball day of the year
-Dance to the music
-Micromanage
-Embrace technology

These are all good concepts, but is it realistic to think that our World Series could ever reach the heights of the Super Bowl? There are some things in our favor as baseball fans. Many of the teams in baseball have players from other countries, making it in an international spectacle. In the NFL, there are few players from outside the United States. People aren’t as prone outside the country to watch because there are no athletes on NFL teams from Dominican Republic or Japan.

At the same time, some things just aren’t in our favor. The big deal about the Super Bowl that creates a critical atmosphere on every play, every inch, and every moment is it is one chance at immortality. There is no game two, or three, or four to capitalize on a bad outing. That makes the Super Bowl must see television from the start. It’s 3 hours of do-or-die athletic performance. Much like a game seven is if a series goes that far in baseball. So how do we create that atmosphere and feeling for the fans if their team is not involved in the World Series?

Not everyone wants to watch the World Series like we do just to write about it and know how history went down. Baseball isn’t blessed with that many dedicated fans. Not to the degree that NFL football is.

People also don’t wanna watch just to see the commercials. Sponsors won’t dish out the big bucks because there aren’t as many viewers. Spots in between innings aren’t in as of high demand. You get the picture. We’re talking about how to raise the idea of that demand.

In going with the technology angle that Starks touches on, why not give every team a piece of the action? The payoff for Major League Baseball might be very good if every team was somehow represented at the World Series. How do you do this? Major League Baseball should go out and hire a blogger (yes a blogger, get with the times) to represent every team in Major League Baseball a month before the October classic begins. The blogger would be a well known writer from each fan base. That individual will then run a blog that will be going for the duration of the series. They would be live at the series. They would write about what is happening on the streets. It would be there job to write about all aspects small and large of the World Series, and they’d see it from the eyes of being a Cubs fan (since they’ll never get there on their own) or a Mariners fan. That way, you’re getting readers on the event from every part of your fan base. These bloggers would advertise a month or so in advance that they indeed would be covering the World Series a month in advance to gain some steam for the big event.

This is just one of many ways that baseball could help its cause. Any other ideas? Post them in the comments. And FWIW, we’d like to see the Steelers take Lombardi’s Trophy on sunday. Tradition all the way.