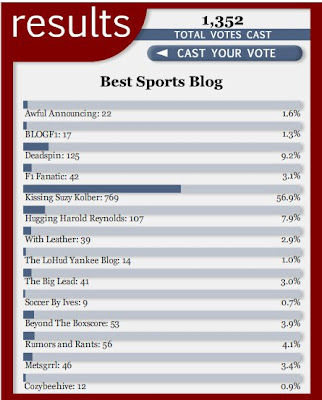 The time has come to vote for 2008 Sports Blog of the Year. So in other words, show up, cast your vote for one of the same 8 recycled candidates from last year and be done with it. And be sure to vote once a day if you give a shit.

If you’re going to go and vote, do the right thing. Vote for Deadspin. It’s the measuring stick by which all blogs are to be up against. Without Deadspin, there wouldn’t be a ‘Sportsblog of the Year’ trendy award club. There wouldn’t be many blogs in general. If any blog is going to win a trendy little award that caters to the same blogs year after year, it should be Deadspin.
I guess the main problem I have with this award is that; while some of these are great blogs that we read, it’s not all sports blogs that are considered.
You have to fit a certain criteria to be one of the sacred few. And anyone who sees this will certainly say “well it wouldn’t be fair if we let everyone play”. But the only blogs that are up for the award are paid gigs where the guys get to sit in their den all day, spend 22 hours a day on the internet if need be, and pump out anywhere from 5 to 25 posts in a day. That’s hard to compete with when you have a mortgage to pay, a social life to have, and you’re not paid to be a full-time blogger.
Maybe there should be a Bloggy for ‘non-paid blog of the year’. Or ‘best blog who can’t keep up with the Kissing Suzy Kolber’s of the World’.
Life is one big ass-kissing contest. If you’re good enough at it, and you kiss enough ass in whatever world it is you’re striving for success in, maybe you’ll get ahead in life. Or maybe you’ll get a book deal at just throwing shit on 288 pages. Maybe a publisher will take you on because you’re good at talking about punching someone in the cock and because ‘you’ve got over 30 years watching sports’.
Nah. Probably not. But in the meantime vote for Deadspin.
UPDATE: Alright, so you know what. We were reminded that we were being pretty general in lumping all those blogs in together. After a visit to Metsgrrl’s blog and seeing the greatest hits over there, that blog is pretty sweet. We like it because it’s a lot like our blog only it’s focused around the Mets. But it catches the simplicity of the game of baseball in its finest moments. So, if we’re able to sway our readers vote–we’d like it to go to Metsgrrl.

Related Items
Next Story → Perfect for this Week's theme