Home / 'The Deal' / Jay Bruce is a ballplayer, but his team is lacking

Jay Bruce is a ballplayer, but his team is lacking 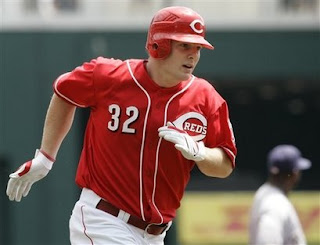 Rounding the bases on home run #11

Jay Bruce is proving us right. The guy is an absolute monster of a ballplayer. It’s a joy to see him hitting 3rd and in right field where he’s belonged all along. He’s on a roll similar, but not as torrid as; when he was first called up. Bruce hit a 2-run homer to dead center field off Jeff Suppan today, as well as doubled and drove in 3 runs in all. He also threw out Prince Fielder at home plate from deep right field. It was an absolute piss rope of a throw. He’s a once in a lifetime ballplayer that can make us miss Josh Hamilton just a bit less, and there won’t be many who ever come along for us to see that honestly could do that.

Now for the bad. Homer Bailey got beaten again, and although he didn’t throw all that bad (we heard he hit 97 mph on the gun today), he still is winless on the season and just hasn’t had the year we thought he should have.

Rick Weeks collected 4 hits. When Weeks gets 4 hits against your team, you know it’s going to be a long day. The Brewers won their second in a row and take the series 2 out of 3 on Reds Community Fund Day at the ball park.

Related Items
← Previous Story No Jinx Tonight, unless for Brewers
Next Story → Reds work OT in loss to Astros