The Battle of Ohio commences tonight 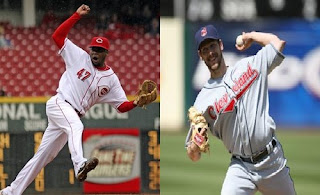 Tonight the Battle of Ohio opens up with the Indians rolling 4 hours up I-71 and into Cincinnati to take on the Reds. Usually when the Reds win 3 in a row as they have achieved recently, they earn the title ‘Surging Reds’. I won’t do that. Cincinnati was opportunistic in beating the Marlins the past three games, but they did it with some luck; they haven’t looked dominating like the Indians have while catapaulting back into first place.

The main reason the Indians look dominant is their pitching. They had a stretch where three straight starters had shut out the other team in their appearance (Carmona, Lee, Sabathia). They’re still not really hitting like they should but this should make for an entertaining series. The Reds always seem to give a heavier loaded Indians team fits. Ken Griffey Jr. can still find the humor in not hitting, thank goodness.

as we were last season, but we have to work 16 hours tomorrow. We’ll be watching and commentating we assure you.
In the end, we see the Reds taking 2 of 3 here at home to stifle the Indians recent hot play a bit. The Reds have no business winning this series, but they’ll find a way. Dunn homers once as does Griffey in the 3 game set.

Related Items
← Previous Story Janish a hero like Moonlight Graham
Next Story → What can I say? Adam Dunn is a saturday night type of guy