Who's going/Who's staying before July 31st 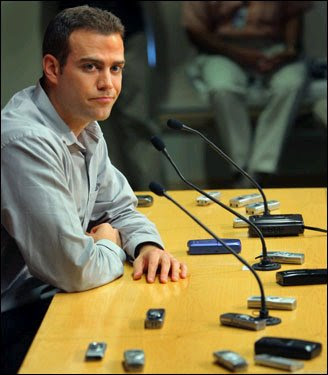 The trade deadline is looming, just 6 days away. Today we’ll give you a look at the players that are being discussed in the inter-workings of Major League Franchises, and if they’re really going to get dealt. People think that this July 31st will be a slow one, but we assure you; it will not be. While some big names might stay put, we hear there could be some surprises. Stay tuned in all week as we’ll be updating the trades we’re hearing about going down.

Jon Garland, Chicago (AL)
Garland is on his way out of Chicago. As soon as the Sox made the decision not to trade Buerhle, I said to myself before the rumors even started about Garland, ‘they’re going to trade Jon Garland’. He could be a bolster to some pitching staffs due to experience, but really doesn’t offer all that much value. Still, no one else is really out there. Someone will take a chance on Garland and try to catch lightning in a bottle.
Staying/Going: Going
Most likely suitors: Philadelphia, New York Mets, New York Yankees, Chicago Cubs, St. Louis

Adam Dunn, Cincinnati
This one pains us to talk about. In the NFL, when you’ve got a great player, you fucking keep the guy. Dunn is a great player and he’s having another Dunn-esque year. He’s a home grown talent. You know the reasons why the Reds should keep Dunn. You know why we love Dunn. Wayne Krivsky won’t get equal value by trading Dunn, now or next season. The best bet for the Reds is to keep him, lock him up long term, and build around him. It’s not his fault they still have no pitching. If they trade him they will never score. No one wants to go down in history as the man who traded 500 HR Adam Dunn, Frank Robinson II. You have to have some serious brass balls to do that. We think Krivsky lacks the balls to do it.
Staying/Going: Staying put
Most likely suitors: Anaheim, Detroit, Los Angeles, New York Yankees

Mark Teixera, Texas
‘Tex’ could very well be the best player moved here at the deadline. Texas wants to get rid of Teixera and his huge salary. Texas seems to replenish hitters well but never find good pitchers in that ballpark. They now view Teixera as a ‘dime a dozen’ type hitter. While that isn’t true, they’re going to do their best to once again dump salary and try to find some pitching prospects in the process. Tex is in his final days in Texas.
Staying/Going: On his way out
Most likely suitors: Baltimore, New York Yankees, Los Angeles Dodgers, San Francisco

Eric Gagne, Texas
Gagne had 2 saves yesterday and he looks to be somewhat back to the dominant form that he was once in. He’d be a huge lift to a bullpen down the stretch looking to improve their closer, allowing that team to have a couple options or move their current closer to the set-up role. Texas probably wants a pitching prospect and a high end hitting prospect in return for Gagne, someone who can likely set the table and provide some offense after Teixera is dealt. Gagne is headed to a contender, as Texas never was a good fit for him. Terrible signing by Texas.
Staying/Going: Going most likely
Most likely suitors: Cleveland, Detroit, Toronto

Jermaine Dye, Chicago (AL)
Chicago is going to dump someone. They’re probably thinking they wish they could dump their manager, but no one would want Ozzie Guillen, and they’re paying the fucker so they might as well let him manage. Dye still has a gun from right field and a ton of pop still in the bat. He might not move as well as he once did but he makes up in that category with guile and experience. He’d be a big time right handed bat for a contender or a team trying to get into the playoffs.
Staying/Going: Going
Most likely suitors: Philadelphia, Atlanta, Milwaukee, Los Angeles Dodgers

Pat Burrell, Philadelphia
Pat the Bat is having a horrific season in Philadelphia and we’re hearing he desperately wants a change of scenery. He’s split time with Micheal Bourne and it hasn’t really lit a spark under his butt as it should have. Philadelphia will dangle Burrell in nearly any deal as a side piece to a non-contender. We could see this panning out as Burrell ends up somewhere that he’d even hate more than Philly at this point. In this situation, the bad guy finishes last, so watch out, Burrell could be heading to a losing ballpark near you.
Staying/Going: Going
Most likely suitors: Kansas City, Tampa Bay, Baltimore, Oakland, Seattle

David Weathers, Cincinnati
Weathers is having a fine season as Cincinnati’s closer. 19 saves and a low ERA in the 3’s in Great American Ballpark is definitely suitable and makes Weathers a wanted commodity. The Reds have nothing left to play for this season in Cincinnati, and will try to acquire some prospects for this aging arm. Weathers will be one of the more valuable names available at the deadline to teams thinking October baseball, as he has great experience and can be used in a ‘swingman’ type of role on a contender’s roster.
Staying/Going: Going
Most likely suitors: New York Yankees, Cleveland, Detroit, Boston, New York Mets, Philadelphia

Ken Griffey Jr., Cincinnati< /strong>
Junior is back and as good as ever (in Cincinnati anyways) this season. His name has been brought up non-stop but the fact of the matter is, he’s a very tough guy to trade. He’s got a 10/5 clause in his contract, and it is not a real easy salary to move. He’s in pursuit of 600 homeruns, and there is a display set up at the ballpark in honor of this accomplishment in Cincinnati. Baseball is a business, and in the end that business is to put butts in the seats. For these reasons, he’ll stay in Cincinnati at least until the offseason. He’s less likely to be dealt than Adam Dunn.
Staying/Going: Staying
Most likely suitors: Anaheim Angels, Seattle Mariners, New York Yankees

Jason Isringhausen, St. Louis
Izzy was once a dominant closer, but he’s fading fast. This could be one of the last rides for this guy and St. Louis is pretty sure they’re not going to catch the Cubs or Brewers. For that reason, they’ll want to groom a new closer soon–and acquire some prospects to reload for another championship run in the next few seasons while Pujols is on the right side of “30”. If you wanna know where he might be headed, see David Weathers’ possibilities.
Staying/Going: 50/50, we’ll say going
Most likely suitors: Cleveland, Detroit, Oakland

Todd Helton, Colorado
The power is no longer really there for Helton, but he is still a capable line drive hitter that drives in runs and has a quality at-bat each time to the plate. Colorado has figured out that in that ballpark, anyone is going to hit. This will lead them to dangling Helton. He’s a fairly big name, which makes it questionable whether or not he’ll be dealt. We hear Boston has some interest in him in whispers in case Big Papi’s knee and shoulder are not going to hold up until October. It will take some nice prospects with Major League ready arms to get him.
Staying/Going: staying most likely
Most like suitors: Boston, New York Yankees, Minnesota


There are more names to come as the week rolls on. Let us know what you’re hearing, or your differences in opinion in the comments section. Smaller names will follow, but these are some of the bigger names that could be on their way out of their current teams.

Related Items
← Previous Story Throwing it around
Next Story → Source: Lofton headed back to Indians