Home / All-Star Game / The Homerun Derby by the bay awaits

The Homerun Derby by the bay awaits

The 2007 Homerun Derby takes place tonight. As a kid you wait all season long for this event, as an adult, you still wait all season to see it, as it serves as a perfect primer to kick off the All-Star weekend. 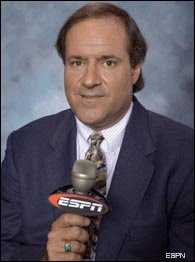 Where would the event be without it’s Grand Marshall, it’s oficianado? We’re talking about Chris Berman here folks. If you’ve watched this Homerun Derby event anytime in the last 10-12 years, you know what we’re talking about. Sure, as a kid you enjoy Berman and his ‘colorful’ commentary and remarks. But it all does grow tiring as an adult, when the same, bad hair, cliche Berman is there at the All-Star Game Homerun Derby, giving you the same Taylor Made gaffs that he fired at you as an adolescent.
Deadspin sums it up better than we ever could, when talking about Berman and his collective bag of tricks. In case you don’t know what we are talking about, here’s some examples of Berman-isms likely to be heard tonight, or that were heard in past competitions:
• “The Big Hurt has us all on our Big Feet.”
• “Does this one have the mustard to center field? Oh, my, a double dog!”
• “There’s a plane up there, look out for the ball, plane!”
• “This shot is beachwood aged … it went off the Budweiser sign in center!
• “People jump on Barry Bonds the way he JUMPED ON THAT PITCH!”

Or more commonly used phrases:
• Particularly long home runs: fuhgetaboudit!
• Balls off the foul pole: doink!
• “Back back back back back back…..” any ball hit in the air
It’s enough to come up with a drinking game beside the game comprised of only Berman butchered and brutality quotes. Either way, we’ll enjoy the Homerun Derby because we remember many summer nights as a kid watching Ken Griffey Jr. hit one into the warehouse at Camden Yards, or the way that Brady Anderson almost won back to back contests somehow, yeah somehow alright. We actually had the pleasure being on hand for the event in 1997, when the derby was held at Jacobs Field.
We’re looking forward to the derby, and our money is on the National League, having sluggers like Albert Pujols, Ryan Howard (the non-All Star), and Prince Fielder (tell me he wasn’t built for this contest). Then again, look for someone like Alex Rios of the Blue Jays to come to the competition and win it, due to the fact that underdogs seem to shine in this event; and Rios has never hit more then 17 homeruns in a season. Might as well of had Grady Sizemore in the event–but we’re glad that didn’t happen, we can’t have his MVP swing messed up for the second half.
Update: Aparently, Sizemore was asked to participate, but he told MLB no-dice.

Related Items
← Previous Story A Case of the Mondays: Barry Bonds is an All-Star
Next Story → It's getting more like the 3-point shootout every year