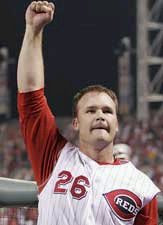 David Ross can kiss our asses
David Ross got a nice ripping from us earlier in the week after hearing that he was hound-dogging our girl. That’s fine, but the least he can do is not be a dick about it. He’s terrible, lower then dog shit, and we just hope he’s not a Red much longer. We’re sick of pretending to pull for him and would like to see his mendoza line average drop from the high .100’s it is at currently.

Dispatches, Dispatches, Dispatches
The week saw us cover several ballgames live, as we should be doing. It is that part of the season. Editor George caught a classic battle in the Bronx, with Jeter making a typical Jeter play and Mariano Rivera dominating. I got to see Homer Bailey pitch live for the first time ever, and got some candid photos of him. We also enjoyed Hibachi with Edwin Encarnacion at Benihana after the game. Oh yeah, and we saw the game that Josh Hamilton shit on Barry Bonds and the Giants.

Goodbye, farewell to you; Grey Goose Narron
Our friend Jerry Narron was fired as manager of the Cincinnati Reds, in a move that we understand but don’t have to like. You will be missed Jerry, but with the way things have been going in Cincinnati, we just weren’t surprised. We saw Jerry’s final game as manager, and chatted up some Major League advance scouts.

All-Stars are anounced
The Major League All-Star rosters were anounced, both for the reserve and starters. Grady Sizemore made the AL squad as a reserve, and then later on after being named he hit a grand slam to seal the victory against the Devil Rays. We gave our thoughts on the AL Starters, the fans actually did a pretty good job voting them in.

Happy 4th of July, and other hodge-podge
The 4th of July played out nicely, baseball and fireworks, what more could a man want? We began the initial weekly segments with our Case of the Mondays rant, and the Hoggers Review of a nice flavor of Skoal, in which we’re enjoying as we write this very post!