Frank Thomas reached baseball immortality tonight hitting his 500th career homerun in the Minneapolis Metrodome, the stadium in which he hit his first career homerun. Thomas was given a standing ovation as he rounded the bases.

In an era where the longball has been defined by steroids, Frank Thomas is a big man whose name has never came into the picture. I remember Thomas as a kid (when he and I both were), and he was the same size and stature as he is now.
The thing about Thomas’ timeless and seemingly ageless hitting of homeruns is that he has withstood the test of time. With a frame that you would think traditionally would not age well, Thomas has kept on crankin. Another measure of Thomas’ 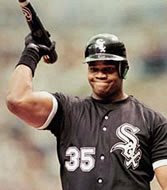 timeline in the game? If you were playing the baseball association game, Thomas connects Carlton Fisk (1990 White Sox-age 42) with Jesse Litsch (2007 Blue Jays-age 21).

My personal association with Thomas? When I was a kid I loved him 2nd most next to Kenny Griffey Jr. I got one of my coveted Thomas upper deck baseball cards, wrote a nice little letter in what I’m sure looked like fist writing (still does), and shipped it off to the offices of the Chicago White Sox at a certain Comiskey Park in the Chi’. What did I get back? A photo-copied, black and white photo complete with photo copied autograph. I didn’t even get my card back. It’s a damn good thing that I only sent out cards I had doubles of, just in case. Thanks a lot Frank and company, dicksnatches. I forgive you now anyhow, and we’re really happy you reached the mark. Have fun in the Hall of Fame Frank!