Get to know Dan Haren before he shuts down your team

You know this wasn’t exactly how the story was supposed to play out. We weren’t supposed to be doing a feature article on this guy, we don’t do many feature articles/posts on journeyman guys who kick around the big leagues; unless we’re poking fun at them.
I guess when you’ve quietly put together a half a season of 1.64, 8-2, 84 K to 24 BB, all the while being two months short of your 27th birthday, you’ve earned some respect. Like we said though, quietly.
The guy we’re talking about is the new short-run ace of the Oakland Athletics Danny Haren. It’s not a typo, notice we said ‘Haren’ not ‘Harden’. It wasn’t supposed to be Haren posting these numbers at this point of 2007 for the A’s. If anyone said before the 2007 season that the Athletics would get this type of production out of a guy figured to be a 2 or 3 starter in the rotation, most fans would be thinking the A’s were heading to the playoffs, since Rich Harden has the nastiest stuff on the staff, right? Afterall it’s Harden who is the pedigree, Harden who has the big contract and the headlines, not the poor man who spells his last name the same way but with a “d” insterted at the midpoint.
As he enters his start this afternoon against the Cincinnati Reds, Dan Haren is the #1 statistically ranked pitcher in baseball. At this point it can hardly be counted as fluke or just fooling American league hitters that aren’t used to facing him. There has been time to adjust. The word is out on him, as well as game film. If the hitters were going to start hitting this guy, they should have already been doing it by now. No, Haren is no fluke, he’s got some staying power. 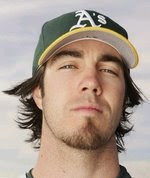 It didn’t always look so encouraging for Haren. Through his first 4 seasons he had the look of a career journeyman pitcher, posting a 34-35 career record in 87 big league starts.
He began his major league career in St. Louis where he was overshadowed by the likes of Chris Carpenter, Mark Mulder, even Jeff Suppan. His confidence was shot down by the way he was utilized as a rookie, and in his sophomore campaign Haren was relegated to the bullpen in long relief and mop-up hell. He made only 5 starts that second year in St. Louis. The future looked as if he would just be another guy with a nice arm who bounced around for a few years and then dissapeared into obscurity. He was seemingly destined for a Cal Eldred-esque career.
We saw him make a start in 2003, one of which we witnessed in Cincinnati where he was hit very hard all over the ballpark by a sub-par and beat up Reds team late in the season. He had the tools, the build, the arm, the velocity and movement, but something was just wrong.
Then came the beginning of the reclamation. It started as just a trail back to respectability that would lead to the 3 months of domination he’s had thus far here in 2007. He was traded to Oakland where he would show some flashes of brilliance, throwing 3 complete games in 2005 and posting the first winning record of his career (14-12). The ERA came all the way down to 3.73 also a new career mark for Haren. He had solidified himself in the Oakland rotation, taking the hill for all 34 starts he was asked on the season. Still, 14 wins does not give a pitcher a token to coast, and he returned in 2006 to post the same amount of wins with one more loss and a bit higher ERA.
In 2007, it was clearly Haren’s chance to pounce at the opportunity to shine. Barry Zito left for greener (MUCH greener) pastures in San Francisco. Rich Harden, the incumbent young ace of the Athletics staff has struggled with injuries all season and now finds himself trying to rebound in the Oakland bullpen. It has been Haren, the man with the ‘r’ in the middle of his surname, that has been the guy to take the rock every 5th day and stop streaks, shut down teams, and make Oakland a winner.
He’s done a pretty fine job so far. If this has just been a hot streak that has lasted a bit less than half of a season, it has been a dominating run. But there is something about the kid with the long black hair and gritty chin strap patch that makes you think he might have just found himself. There’s something about Haren, the poor man’s Harden, that makes you believe he’s got staying power. He’s seen the bottom of the barrel and he’s still here to talk about it, those were not the finest days.

One thing is for certain though: if you talk to those in St. Louis, they sure would be happy to take a Dan Haren–and not Rich Harden–off the A’s hands right now.