Weighing in on A-Rod's little 'situation' 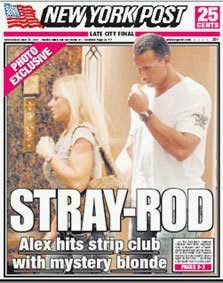 Rodriguez has the same cravings and desires that any man has. Just because he was blessed with the God-given ability to hit a baseball doesn’t mean he obstains from those urges we all have. The guy is human, just another one of the guys. The only difference between him and most of us is he couldn’t control those urges enough to be faithful to his wife. Another difference would be that when he screws up; obviously the world hears about it. The media has been on this story like flies on shit (since we’re talking about it here, there you go).

Sure it’s a great story to talk about. Baseball’s golden boy, baseball’s prince, is just a pussy chasing scumbag like many of the other human beings that watch him make great plays on the ball field every night. That said, you have to give some credit to A-Rod’s slyness that he hasn’t been caught to this point. Afterall, with as much as it sounds like A-Rod hits those titty bars, it would certainly seem that he should have been caught by now, right? Either A-Rod is a pretty sneaky one, or it’s bullshit coming out of the woodwork at this point.

I’m not an Alex Rodriguez fan. I think he’s a special talent, but I can’t even say that I really enjoy watching him hit. I think he’s a greedball player, who stuck it to a Seattle Mariners franchise that still might be winning championships if he was there. I think he’s paid for that time and time again, having horrible experiences in Texas (being coached by Jerry Narron), and now moving onto New York–where someone will report when you piss behind a public bush.

That said, I think that Rodriguez should be cut a little slack. Some of these very same Johns that are busting him out for being a pervert strip-club conoseur, are the very same type of people you find in those seedy places every day, three hours a day, monday to sunday. Count on that being true. So A-Rod has a random trip to the titty bar to blow off some steam; who gives a shit. The guy is being paid to hit homeruns and drive runners in. Why do we care that he likes champagne rooms and a big pair of 36D’s in his face?

In a few months, if A-Rod leads the Yankees to the playoffs and hits, no one will give a damn about this strip club incident except a few of the fans that have nothing better to banter with him about. If the Yankees ultimately fail; it is going to become an issue. Mark my words, that is how it will go. You wanted New York Alex? You got it.