Reds to do battle with a shiny new Penny 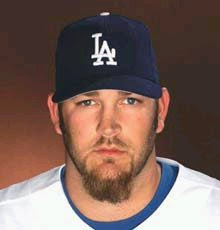 Tonight the Reds face off with one of the toughest pitchers in the big leagues. The ace of the Los Angeles Dodgers is on the hill tonight out in Chavez-Rivine, Brad Penny. He’s not just any Brad Penny, he’s the new and improved Brad Penny. Currently he’s 4-0 with a sparkling 1.39 ERA, 29 K’s to go along with just 17 base on balls. Could it be that Penny has came of age and isn’t trying to strike everyone out anymore?
I’ll say this, I don’t think that the Reds are going to have the hard time with Penny that teams have been this season thus far. This is a team that can rake right handers, and I mean anybody. Just ask Carlos Zambrano, eh? Now put a left hander on the mound (cough Randy Wolf) and we get what you had last night.
I can see the Reds getting 5 or more runs off Penny tonight, and I think they will. That doesn’t mean by any means that its a victory for them. Afterall, with that bullpen no lead is safe. Hopefully we get a couple big homeruns from guys like Hamilton, Dunner, Griffey, Hatteberg, or Javy Valentin. At this point we’re 9.5 games back of those torrid Brewers–who have destiny written all over them. We have to start going for broke and winning every night. Why not tonight? Beat Penny and get on a roll.
I’ll be at the Kickstand Pub throwing a few back. The best thing about the Kickstand other than playing solid golden oldies classic rock night after night? It’s in walking distance.