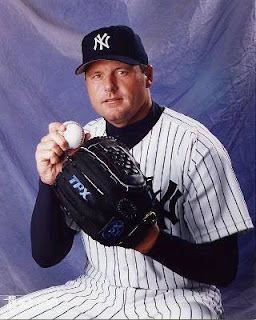 The Rocket returns to the Bronx
Roger Clemens signed a $28 million dollar deal for one year to return to the Yankees and play with old teammates Andy Pettite, Derek Jeter, Jorge Posada, and Joe Torre. We also speculated that the Rocket might have benefitted from some outside help to reach his amazing numbers so late in his career.

Editor George returns from the dead
He has a new wife, and he’s a busy guy. Still, he made time to stop in and hang his hat on the rack long enough to tally a few more posts. He talked about the struggles of Mariano Rivera, who won the first annual Anne Boleyn award. He also talked about the fantasy benefits of a player like Shane Victorino, and made fun of the Cincinnati Reds closer David Weathers; who we’ve decided has the heart not of a human but resembling that of a pig.

Cleveland has their ups and downs
Lots of big news for the city of Cleveland lately. The Cavs are 6-0 in the playoffs. The Browns just landed 3 great players in the NFL draft. The Indians were winning at a white-hot pace. While the Tribe’s superstar centerfielder Grady Sizemore landed on the cover of Sports Illustrated (hits shelves today), the team lost two in a row in Anaheim after Cliff Lee’s masterful performance in the series opener. The Indians record still sits at 20-12.

Adam Dunn is enjoying a peak while his team enjoys a valley
Adam Dunn now has hit 5 homeruns in the month of May, and has tied Barry Bonds for the NL lead with 11. We showed our love for the Big Donkey, predicting that he’d catch A-Rod in the major league homerun chase. That same day we also predicted the Reds would begin their turnaround to the season and save our boy Jerry Narron’s job. The Reds won and Dunn finished just a single short of hitting for the cycle.

Barry Bonds keeps slugging away
The chase is on. We talked about our disdain for the production of a Barry Bonds commemrative figure that will be produced upon him breaking Hank Aaron’s record. David Ortiz came to the defense of Bonds, saying that Barry deserves respect and that he (Ortiz) may have taken steroids himself in his youth unknowingly. Unfortunately, Bonds reaching the record at this point is nearly a foregone conclusion rather than just a possibility at this point.