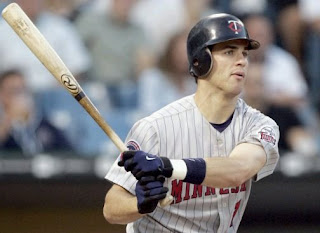 The latest member of the walking wounded on my fantasy team is Joe Mauer. Mauer is headed to the DL, retroactive to yesterday. The aparent injury has to do with a calf muscle. Hopefully he gets with that tiny Playboy bunny girlfriend of his and gets well soon. My fantasy team needs him badly. I don’t know who is playing with a voodoo doll that is in the shape of the Legendary Hillbillys III but it’s definitely working in terms of landing one of my guys after another hurt.

In his replacement I signed Paul Lo Duca, in hopes he can get his game face on and play with some 17 year olds play some good baseball and be effective for the next two weeks.

From the Twins talk blog:

Incidentally, while there’s never a good time to lose a player like Mauer
to the DL, this might be the worst possible time — the Twins have a horrific
schedule in May, and this is going to make it just that much harder to sneak by
with a few good wins. It could be a long couple of weeks, with the Twins needing
to rely even more than normal on their pitching.