Home / Wrap and Recap / Your nightly wrap and recap

Your nightly wrap and recap 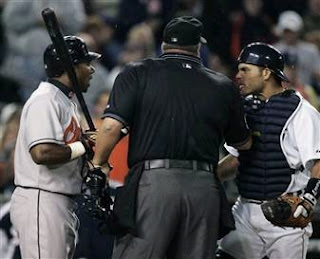 Miguel Tejada and Pudge Rodriguez got into a hairy situation that ended in both benches clearing. The mess got cleaned up enough to finish the game, Jeremy Bonderman got his first win of the season and Gary Sheffield hit his second homerun of the season. Francisco Rodney with the save.
Atlanta 5, Philadelphia 2
Andruw Jones’ walk-off three run homer in the bottom of the 9th sent the Braves home a winner. Tim Hudson pitched with Josh Hancock’s number on the front of his jersey, the two were teammates and good friends in college at Auburn. Chipper Jones also homered for the 8th time this season in the victory.
Pittsburgh 3, Chicago Cubs 2
Jason Bay’s 100th career homer ended up being the difference in this ballgame. Ronny Paulino doubled home a run to tie the game at 2, while Zach Duke matched Cubs’ phenom Rich Hill pitch for pitch. The Pirates are not half bad this year, they’ve got starting pitching, mark it down, they’re finishing above .500
Washington 3, San Diego 2
Jake Peavy struck out 10 Nationals hitters but could not help the fact that San Diego could only muster one run over 6 innings over the struggling starter for the Nationals John Patterson. Austin Kearns had 2 hits and an RBI, while solo homeruns for Josh Bard and Termell Sledge accounted for the Padres two runs.
Milwaukee 7, Cardinals 1
Jeff Suppan went the distance throwing 9 innings, striking out five and allowing only one earned run against his former team. The Cardinals, playing with heavy hearts got 3 hits from Skip Schumacher but Kip Wells allowed all 7 earned runs to the first place Brewers club. This was the first game following the tragic death of Josh Hancock.