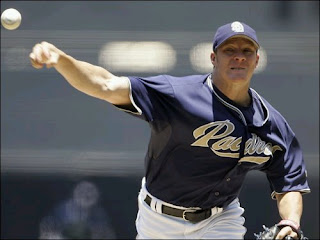 Peavy hears us talking, I swear
You know, I was trying to talk editor George into trading me Jake Peavy in fantasy baseball all season thus far. Wednesday night I was as well, before his start that sealed George’s “No”. My major selling point, and I quote was that “He’s got nasty stuff but he never seems to put it all together and dominate.” Peavy went 7 innings, striking out 16, allowing only 2 hits and at one point struck out 9 Diamondbacks in a row, but had to leave due to a high pitch count. Arizona won the game off future Hall of Famer Trevor Hoffman with a homerun in the 9th by Steven Drew.

Barry Bonds continues his march towards history
Barry Bonds now has 7 homeruns on the season, and although we don’t like this guy at all, and we’re crossing our fingers for a popped hamstring, it’s becoming aparent that this whole thing is inevitable. He’s going to get to the record, and some folks aren’t handling it well. Now only 14 homeruns behind Henry Aaron, Bonds is looking as strong as ever before. This story is going to continue to get bigger and bigger. Oh yeah, the Giants have won 8 games in a row. I bet you didn’t know that.

The Cleveland Indians are becoming the cream of the crop in the AL
The Cleveland Indians are on fire, and I called it. Before their 12-inning win in Minnesota, I said they’d go on a run. They swept Minnesota, and have won 5 in a row, and 6 out of 7. This run has catapaulted them into first place in the AL Central, and they have a home series this weekend. If they can continue the streak through the weekend, they might not give it back at all. This team is young, firey, and good.

The Yankees Golden Boy makes his debut
Phillip Hughes made his debut last night and editor George was right on in his prediction of Hughes probably struggling. The kid had 5 strikeouts, putting him 4,599 behind Roger Clemens for his career. Who knows, 15 years from now maybe we’ll be writing about Hughes making a run at passing Roger Clemens. We plan on being here, the only question is will Phillip Hughes still be around?

Cole Hamels is a much cooler dude than Jason Werth
Cole Hamels had his career night with 15 K’s against the Reds, and we were there to witness it. We had a little run-in with Jason Werth, of bench-warming Dodger fame. Ladies, we’re warning you, steer clear of Jason Werth, he’s nothing but trouble! We’ve checked our sources and he’s only in it for the ass. He’ll string you along honey. Stay away from him, you hear? We laid off Charlie Manuel for the week, he’s too easy of a target and his team is playing well since he challenged a Phillies radio host to a pugilist duel. Ryan Howard became a new target, by his own choice. He doesn’t like us, or anyone for that matter.