I’m going to tell you a little secret mayn, my fuckin’ ERA is 15.75 right now dude. That’s not the secret, everyone knows I’m shitrags out there. The secret is, I was sucking on purpose out there this season early on, so I can get my guarunteed money, go out and buy enough skunk, hydroponics, kein nugs, and fucking dojo government issued shit that could make an army fly man. Yeah, that’s right dude-I wanted to make sure that on this day, April 20th (4/20), I could be on my couch, with Reese’s peanut butter ice cream under my left arm, and a fucking joint in my right claw mayn. Oh shit. Ohh shit dude. At 4:20 man I’m going to get so high I can float and I’ve got this Grateful Dead live tribute CD I’m going to throw in right as I simultaneaously take the first toke, oh shit mayn, I gotta go take a couple tokes right now man.


Daaaaaamnnnnn dude. Oh man. Look at these sandals. I got these things in the bahamas off some Rastafarian that told me John Denver wore them. Oh shit man you know they’re comfortable and there is nothing I like more than leather sandals but duuuuude, they make my fucking feet look huge. I’ve got size 16’s but this one buddy of mine I call Hatchet, he fucking says they make my feet look like Club-Sandwiches man. Oh god man. I need a club sandwich right now DUDE.

Fuck man, I had all this shit I was gonna do before 4:20 today and now I can’t remember what it was I wanted to do first. I was gonna go play some basketball at the Y and show these dudes there my new Ninja Sick Dunks and do some running but fuck man. When in Rome you know? Shit dude. I wonder if Napoleon ever smoked weed when he was building Rome. I bet he did. I bet that shit was crude and really ripe man. Yeah. I bet you know it was mid-evil type shit. Oh fuck dude. I’m gonna just fucking get up and start cleaning up this place and I think I’ll remember what it was I needed to do today.

Oh man. Fuck it. You know what would be cool? Putting a Playstation 3 in my Denali. Yeah man, like in the Denali. I want it in the front console, on the fucking dashboard with one of those little miniature flat-screens, and I wanna install bose speakers around the whole car so it’s like surrounding you and shit. I wanna get an organ-grinders monkey to drive it man while I play. Haha Fucking organ grinders monkey. Hahahah. Hahaha. a;fhlasdfkl;hsaf. Sorry, I’m cracking up at that shit. I just want him to have a little hat you know, and he can drive. Can you imagine him laughing and driving and having a little red hat, with a flap top and a strap. And he’d be wearing a matching suit and no shoes. Oh fuck. You know what? I bet his feet couldn’t reach the pedals man. Fuck! FUCK! What am I gonna do. Oh man, what am I gonna do? I’ll get him stilts. Stilts will help him. Hahaha organ grinder. 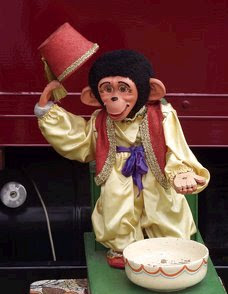 Oh shit dude. You know what’d be phat? I wanna play Mortal Kombat on that Playstation in my Denali. Ya dude. I call Jonny fuckin Cage. I will have him to that ninja split and keep hitting your guy in the dick. Fuckkkk Duuuude. No other moves, I’ll just kick your ass with that one move. I tried to do that when I was in Detroit, and it fucking put me on the DL for like, 60 days man. Snapped hamstring. Fuckin’ Jonny Cage. He kicks ass mayn. Oh shit! You know what? I don’t know if they even make that game for Playstation 3. Fuck dude. Now what am I gonna do?

Dude I’m like a big kid. Aren’t I like a kid man. I’m a big, 30 year old kid. Fuck baseball. If it’s not fun, don’t play. When I have a kid, I’m gonna tell him not to worry about competitive sports. If he wants to play, like play and shit, but if not, you can be like your old man, just say fuck it some days mayn. Oh god, I’m so high. Sooooo stoned. I’m tired too.

(Starts playing a roll of athletic tape, laughing, flinging tape like a yo-yo, tape smacks him in face)

FUCK! Ow! Bitch. Dude have you ever had blueberry nuggets? I did man, and I bought some for tonight. Wait till little bro gets some of this shit. There’s like, little blueberries in this schwag. Ya dude. Real blueberries, dried and shit though. I had it one time in college, we were tailgaiting and shit with some buddies before a football game, and I mixed Red Stripe with the blueberry weed that night. Man I was barfing something fierce dude. Fuck.

Ya man It was like, coffee with blueberries. Best tasting ralph I ever had come up though dude. Oh shit man. It’s 12:15. I gotta save some of this stuff for 4:20 pm, AND 4:20 am dude. How many Holidays do you have that you get, like, twice? Other than Thanksgiving when you go up for seconds and thirds, there isn’t any. You only open presents and shit on Christmas one time. 4-20 lets you celebrate twice! I love this day dude. But I gotta save this shit, it’s not even all mine.

(looks both ways, tokes, hides and conceals sack of bud under couch cushion)

Fuck dude. No one will care. It’s a holiday and shit. Hey, I wonder
what ever happened to that little guy on the Dunkin’ Donuts commercials. Ya you know that little furry man, he was cool. I always wanted to meet him………….