Home / Uncategorized / What we know about Ian Kinsler

What we know about Ian Kinsler 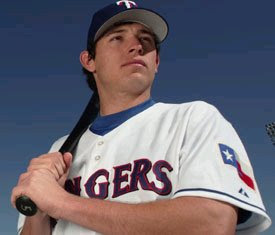 I think anyone who follows the sport of baseball is talking about A-Rod and his power surge that has seen him hit 8 homeruns already. What fewer people are talking about (for now), is Rangers shortstop Ian Kinsler, and his 7 long balls in just 39 at-bats. Last season in 423 at-bats, Kinsler hit 14 homeruns. This season, in almost 1/11th of the plate appearances he’s halfway there.

Kinsler was a rookie last season, and is 25 years old. Born in Tuscon, Arizona, he was drafted by the Texas Rangers in the 17th round (not overly high) of the 2003 amateur baseball draft. Standing at 6 ft and 200 pounds, he attended the University of Missouri and Arizona State University collegiately.

Last year his 27 doubles accounted for more than 20% of his overall hits, which would be the first indication that he was due for a bit of a spike in power numbers for this season. I also owned him in fantasy baseball last season for a cup of coffee, if we’re providing random info on the kid.

Do we expect him to keep homering at this rabid pace? Absolutely not. He’s hitting a long one once every 5.6 at-bats, with makes a Ruthian pace look very modest. However, he might very well emerge as the next big time hitting second baseman in the AL, putting up numbers that everyone thought someone like Hanley Ramirez of Florida would be doing right now. Also, it’s easy for him to be overshadowed by a guy named Micheal Young, and while Young is superior on his paystubs, we’ll venture to bet that at seasons end, their statistics will be comparable or even in favor of Kinsler’s.

Now if only the Rangers could find some pitching they’d have something.