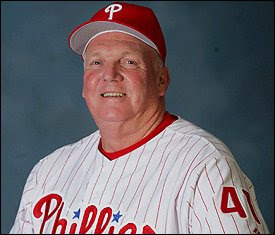 Well it’s funny how things happen isn’t it? After another flogging at the hands of the New York Mets last night, Charlie was left ready to fight anything in his wake. It was merely days after we reported that things were going sour quickly in Philly.

You just get the feeling that things aren’t going to end kindly here in Philly for Foghorn Charlie. Afterall, he’s a good ol’ countra boy, and he’s in the city of brotherly love. Not exactly the pairing that peanut butter & jelly bring to the table is it? Chances are, if you’re a big league manager, and you’re worried about fighting commentators or radio hosts, and not winning ballgames, you’re not long for the job.

We were the first on the scene last night, and we have actual footage from last night’s conflict. It turns out that the ‘spat’ was not over the performance of the ballclub, but rather over the radio commentator hitting on Charlie’s wife. Here is the footage, albeit blurry:

Related Items
← Previous Story Natives are becoming restless in Philly
Next Story → We'll see you at the Ballpark!