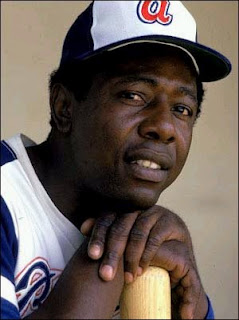 I’m pretty sure that Barry Bonds is the worst fucking human being in the world. Add to that the fact he’s a ballplayer, and you’ve got one real asshole on your hands. There’s better than even odds that if Bonds was working at the local 7-Eleven down the street like he should be, he’d still be the biggest asshole since Pedro Guerrero. Ump Bump, a site both informative and whitty much like our own breaks it down for everyone.

When asked if he would be interested in attending Bonds’ record breaking homerun if the parade came to Atlanta, the current homerun king responded with a nice little attack:

“I’m sorry Barry feels that way, and I don’t have any resentment toward him
whatsoever, but I have no intention of trying to get in contact with him or
doing anything with him in regard to his [chasing the record]. Nothing. Why
should I?” said Aaron, who discovered only recently that the privately sensitive
slugger for the San Francisco Giants wants to become pen pals or something.
“It’s really not a big concern of mine. I don’t know why I should have to do
anything. I might send him a telegram, and that would be the extent of it.”

That sounds an awful lot to me like Aaron is telling Barroid to suck his dick in a nice way, but kind of doesn’t care if it isn’t so nice. But what if the little Bonds record breaking party fell right in Aaron’s backyard in Atlanta this summer?

“I’d probably fly to West Palm Beach to play golf. Again, it has nothing to do
with anybody, other than I had enough of it. I don’t want to be around that
sort of thing anymore. I just want to be at peace with myself. I don’t want
to answer questions. It’s going to be a no-win situation for me anyway. If I
go, people are going to say, ‘Well, he went because of this.’ If I don’t go,
they’ll say whatever. I’ll just let them make their own mind up.”

That’s what Aaron said to the Atlanta Journal Constitution. Aaron gets a major thumbs up from me. I think it’s great that he doesn’t wanna celebrate some cheating fuckhead taking his record. If someone were taking my record, I’d probably make them claw it from my bloody paws with cracked fingernails as well.

Any chance to slam Barry Bonds is also one this blogger relishes in as well. Least favorite athlete of all time. He is where we as society, should stick one giant enema.